RCR Wireless NewsIntelligence on all things wireless.
YOU ARE AT:CarriersT-Mobile tops Verizon in consumer survey; AT&T and Sprint trail

T-Mobile US has made hay in the wireless space as the self-proclaimed “un-carrier” catering to the pain points of consumers, with proof of those efforts seen in the carrier’s subscriber growth over the past couple of years.
A new report from Market Force Information lends further credence to the carrier’s claim, finding T-Mobile US as the favorite full-service wireless carrier in the country. The survey included comments from more than 8,600 consumers through an online survey conducted in May – with women making up 73% of those surveyed – who were asked to rate “their satisfaction with their primary wireless carrier and its services, as well as their likelihood to refer that brand to others.” Results were posted in the form of a score on Market Force’s Composite Loyalty Index.
T-Mobile US garnered the top spot just ahead of Verizon Wireless, with AT&T Mobility a distant No. 3 and Sprint a further distant No. 4. T-Mobile US was applauded for satisfaction in terms of value, ease of changing plans, plan flexibility and access to “new cell technology,” though was last among nationwide carriers in terms of frequency of dropped calls. 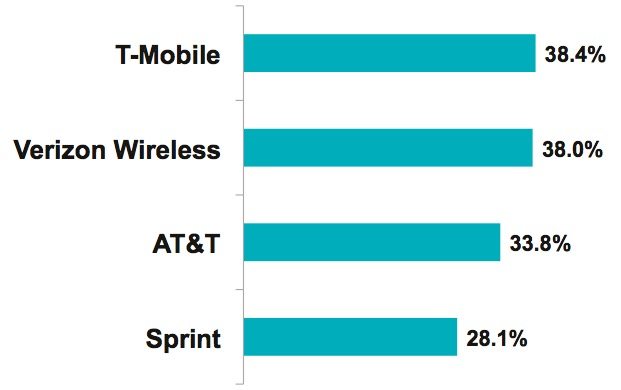 Verizon Wireless topped the survey in terms of network coverage, fastest data speeds, fewest dropped calls, “strength of calls” and new device technology. However, the carrier was dinged in terms of value.

AT&T Mobility was a solid middle player, not quite getting a top score in any one category, and tied just once for last place in terms of plan flexibility. Sprint scored the bottom spot in five categories, though did manage a No. 2 ranking in terms of plan flexibility.
Tackling regional and prepaid-focused wireless operators, mobile virtual network operator Consumer Cellular topped the survey, followed by AT&T Mobility’s Cricket brand and TracFone’s StraightTalk offering. Consumer Cellular, which runs across AT&T Mobility’s network, was tops in seven question topics, with the other two topics won by U.S. Cellular (new device technology) and Cricket (new cell technology). 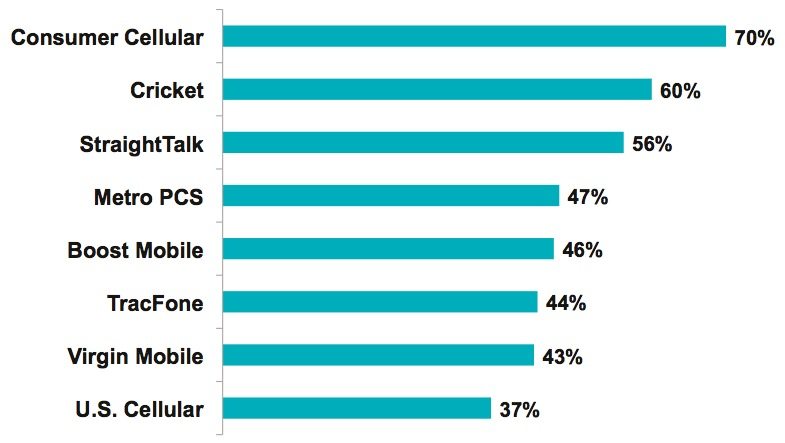 “We were intrigued to find that for the most part consumers are more delighted with noncontract wireless providers than with traditional, full-service carriers,” said Cheryl Flink, chief strategy officer for Market Force. “This could be attributed to the fact that wireless users believe noncontract carriers provide a better perceived value to their customers based on factors like price, coverage and flexibility to change plans.”
In terms of what the numbers mean for customer loyalty, Market Force found nearly three quarters of those surveyed had been with their current carrier for at least two years, with just 12% stating any inclination to swap carriers over the next year. For those that did state the possibility of switching, price was the overwhelming reason, followed by improved network coverage and more flexible plans.
Carriers noted as being the most likely to lose customers over the next year were Sprint and its prepaid offshoot Boost Mobile, with AT&T Mobility and Verizon Wireless seen as the least likely to lose customers.
Bored? Why not follow me on Twitter