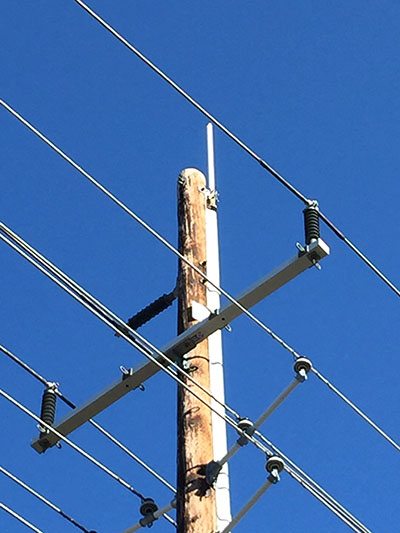 Montgomery County, Maryland, is a scenic, rural area that welcomes tourists and is somewhat less hospitable to cell towers. The county’s residents and visitors are valuable customers for wireless carriers, and are able to enjoy LTE services thanks to a distributed antenna system. DAS antennas on utility poles are much less unsightly than tall towers and are connected to wireless base stations that stay out of sight.

Sprint was the first carrier, or anchor tenant, on the DAS. The carrier commissioned NewPath Networks to build the system in 2008, before NewPath was acquired by Crown Castle. Now Crown Castle owns and operates the Potomac South DAS, and has since added AT&T Mobility and Verizon Wireless to the deployment.

Crown Castle hired Advantage Engineers to perform architectural and engineering services for the LTE upgrade. The original DAS had 20 nodes, or pole attachments, and Crown wanted to add two more. Meanwhile Sprint had seen minimal traffic on one of the existing nodes, so it was decommissioned, leaving the DAS with 21 total nodes. Advantage Engineers audited each site to confirm the GPS coordinates, current technology installed and site conditions compared to existing documents. The engineers also performed structural analysis of the poles when necessary.

“We look at the characteristics of the physical structure and what our client would like to apply to that structure, making sure that there is continuity between the devices and the attachment to the structure,” said Advantage Engineers’ Jay O’Neill, project manager for the Potomac South DAS upgrade.

In this case the attachments included a new antenna at each site as well as a new radio cabinet. O’Neill said the radio units use an open architecture that allows carriers to share network cards and aggregate bandwidth, if they choose to do so. U.S. carriers are historically averse to shared radio infrastructure, but neutral host providers like Crown Castle are encouraging network sharing in certain situations. Outdoor DAS like the Potomac South system are examples of infrastructure that can be shared.

The actual construction work required for the upgrade was performed by a third-party contractor. O’Neill said Crown Castle likes to create a system of “checks and balances” by hiring one firm to perform engineering services and another to do the construction.

The base station for the Potomac South DAS is located at a volunteer fire station, O’Neill said. Fiber attaches each remote unit to the base station, and from there long-haul fiber providers take the signal back to the carriers’ core networks. Verizon is a long-haul fiber provider, and so are a number of cable companies, including Comcast and Cox.