RCR Wireless NewsIntelligence on all things wireless.
YOU ARE AT:CarriersT-Mobile US goes low, Verizon Wireless high in spectrum swap 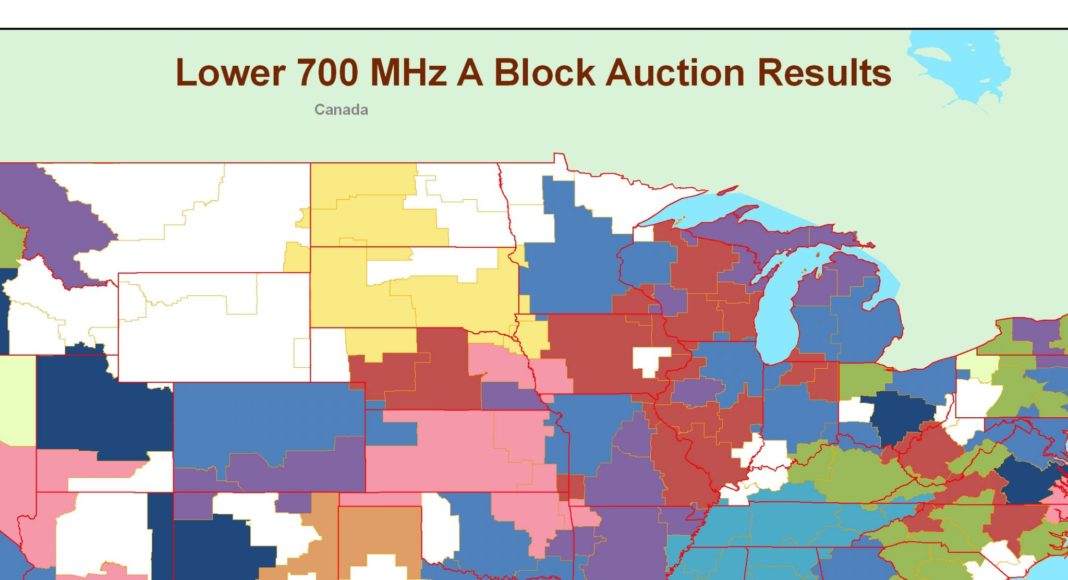 T-Mobile US may be known as the “un-carrier,” but just like regular carriers it needs spectrum to operate.

To fulfill that need, the carrier this morning announced a deal with Verizon Wireless to acquire highly-coveted low-band 700 MHz A-Block spectrum licenses for $2.365 billion and the transfer of some 1.7/2.1 GHz and 1.9 GHz spectrum licenses that T-Mobile US valued at $950 million. The two carriers also noted that they would “realign spectrum blocks in certain markets, primarily in northern California and the Atlanta area.”

T-Mobile US noted that the deal will result in the carrier controlling sub-1 GHz spectrum licenses in 21 of the nation’s top 30 markets and approximately 158 million potential customers. T-Mobile US had previously controlled a 700 MHz A-Block license covering Boston, and with the new deal adds coverage to New York, Los Angeles, Dallas, Houston, Philadelphia, Atlanta, Washington D.C., and Detroit.

T-Mobile US late last year raised nearly $4 billion that it said would be used for possible spectrum deals “in private party transactions and/or government auctions.”

The 700 MHz A-Block licenses include 12 megahertz of spectrum per license.

This is not the first spectrum deal between the two parties. Late last year T-Mobile US and Verizon Wireless filed an application with the Federal Communications Commission to swap licenses in the 1.7/2.1 GHz and 1.9 GHz band that the carriers stated would help better align their spectrum positions. In mid-2012, the two carriers announced a larger deal to exchange 1.7/2.1 GHz spectrum licenses covering 218 markets.

T-Mobile US has been vocal in claiming the need for sub-1 GHz spectrum in order to better compete against larger rivals Verizon Wireless and AT&T Mobility, both of which controlled more than 80% of those licenses prior to the latest deal. T-Mobile US continues to pressure the FCC on rules for the 600 MHz incentive auction that would limit the bidding abilities of the nation’s two largest operators. The FCC recently pushed off plans for that auction until mid-2015.

T-Mobile US said it expects to put the A-Block spectrum to work beginning later this year. The benefits of the 700 MHz spectrum for T-Mobile US should include better in-building coverage as well as broader coverage due to the propagation characteristics of that band compared with the 1.7/2.1 GHz spectrum T-Mobile US is currently using as the basis for its LTE services. The carrier’s LTE network currently reaches 209 million pops, with T-Mobile US CTO Neville Ray noting last year it would be difficult to surpass the 250 million pop coverage mark without the benefit of low-band spectrum. Both Verizon Wireless and AT&T Mobility are looking to offer LTE services to more than 300 million pops once their networks are fully deployed.

The A-Block has been the center of controversy regarding potential interference concerns that pushed AT&T to refrain from including that A-Block in its lower-700 MHz band plan. The interference concerns are between television transmissions operating in channel 51 adjacent to the A-Block uplink channel and from the unpaired E-Block slice of 700 MHz spectrum operating adjacent to the A-Block downlink channel. AT&T had initially contended that the interference would impact the use of the A-Block license and thus the carrier pushed to have the Band Class 17 standard approved that includes just the lower B- and C-Block 700 MHz licenses. Opponents to AT&T’s plans noted that interference was not an issue and that the lower A-Block licenses should be included with the B- and C-Block to form Band Class 12.

AT&T late last year said it would be willing to work with the FCC and lower 700 MHz license holders on a solution to disputed interference concerns, a move that the FCC quickly jumped on.

The latest deal does not mean that T-Mobile US is through with spectrum above the 1 GHz level, as during a conference call announcing the Verizon Wireless transaction it also acknowledged it would participate in the FCC’s planned AWS-3 spectrum auction, currently expected to begin later this year. That spectrum is adjacent to T-Mobile US’ current AWS spectrum holdings in the 1.7/2.1 GHz band. T-Mobile US and a number of other operators have announced they would not participate in the FCC’s planned 1.9 GHz H-Block auction scheduled to begin on Jan. 22.