RCR Wireless NewsIntelligence on all things wireless.
YOU ARE AT:5GVerizon CEO discusses 'five vectors of growth' 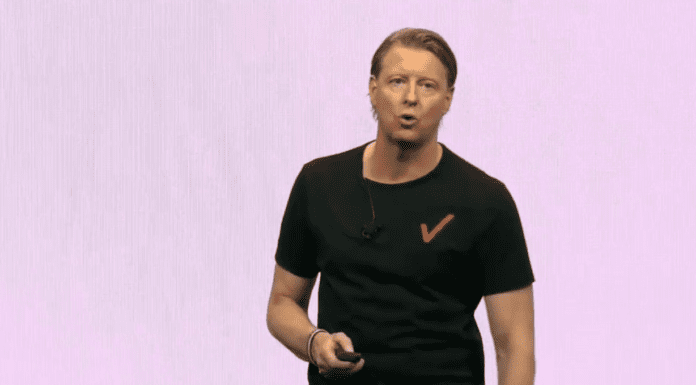 Verizon has been deploying MEC infrastructure for two years giving it a “head start” over its competition, CEO says

Speaking Sept. 21 at the virtual Goldman Sachs Communicopia conference, Verizon CEO Hans Vestberg outlined both existing and developing “vectors of growth” that he characterized as based on “the best network.”

In terms of what’s already driving growth for the company, Vestberg identified 5G adoption, network monetization “where we actually have other brands using” its network, and its investments in mobile edge computing infrastructure.

To the MEC point, Verizon has been the most active carrier in the U.S. in distributing compute working with AWS. In August the company turned up AWS Wavelength services to complement its 5G network in Chicago, Houston and Phoenix. The 5G Edge service launched in mid-2020 and has availability in 13 of the top 20 metros in the country. In addition to the aforementioned locations, Verizon has MEC services in place in Atlanta, Boston, Dallas, Denver, Las Vegas, Miami, New York, greater San Francisco, Seattle, and Washington D.C.

“I would say we’re basically alone still,” Vestberg said of its MEC deployments. “We have been developing that for the last two years and have a head start over anybody else.”

Other vectors of growth cited by the CEO are its “mix and match” model with partners, including Disney+, Discovery+, Apple Music, and other content platforms. The fifth is Verizon’s work with mobile virtual network operator Visible and its pending acquisition of prepaid provider TracFone.

“It’s several areas that we have grown very different from any of our competitors where we meet them in some of the them,” he said. “We have created that based on our network and service…So this is why our positioning is so great, and this is where we actually landed when we decided our strategy in 2018, which we call Verizon 2.0, which is an internal name.”

In terms of network and spectrum updates, Verizon was the biggest winner in the C Band auction, picking up a nationwide average of 161 megahertz of sub-6 GHz frequencies. The operator aims to deploy up to 8,000 C Band sites by the end of 2021.

“That’s a spectrum for generations,” Vestberg said. “That’s going to cater [to] the planning, the execution to keep the best network in this market and the continuation…We have never deployed so much as we’re doing this year.” In addition to the C Band site deployment, Vestberg said the company will add an incremental 14,000 millimeter wave base stations, and is also laying between 1,200 and 1,500 route miles of fiber every month.