RCR Wireless NewsIntelligence on all things wireless.
YOU ARE AT:5GT-Mo US has fastest, most available 5G network, according to OpenSignal 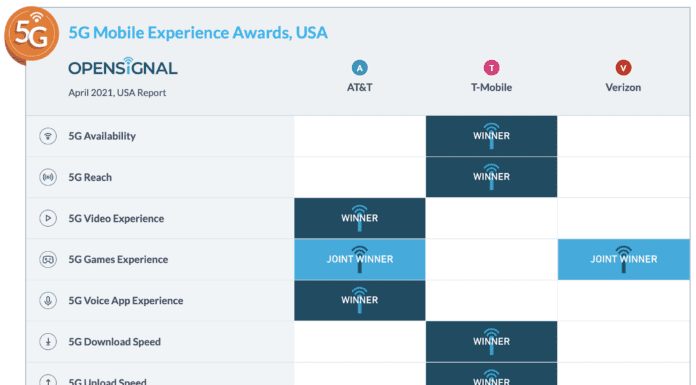 T-Mo US has fastest, most available 5G network, according to OpenSignal

T-Mobile users connected to 5G nearly one-third of the time, according to OpenSignal report

Since the release of OpenSignal’s previous report in January, the availability of 5G under all three major U.S. carriers increased. T-Mobile US maintained its lead when it comes to 5G speed, availability and reach; however, Verizon claimed the fasted 5G mmWave speeds and AT&T achieved the best 5G video and voice app experience.

According to the report, T-Mobile US users connected to 5G nearly one-third of the time (33.1%), a three percentage-point increase from the previous report. AT&T users were connected 20.5% of the time to 5G networks, up from the 18.8% we reported in January, and Verizon ‘s 5G users saw their average 5G Availability increase from 9.5% last time to 11.2%.

T-Mobile US also performed well when it comes to 5G reach, which represents the proportion of locations where 5G users have connected to 5G out of all the locations those users have visited, on a scale of 0-10.  T-Mobile US achieved a score of 6.8 points out of a ten-point scale. Second was AT&T, which scored 4.9 points, followed by Verizon, with a score of 3.2 points, which is 1.7 points and 3.6 points behind AT&T and T-Mobile, respectively.

The significant improvement to T-Mobile US’ average 5G download speed — from 58.1 Mbps to 71.3 Mbps — is likely the result of its ongoing deployment of the 2.5 GHz spectrum that it acquired as part of the merger with Sprint, which provides more capacity than the 600 MHz T-Mobile US previously used and much more than the lower frequency bands used by AT&T or Verizon.

AT&T’s 5G download speed only increased by 1.2 Mbps (2.1%), while Verizon’s speed improved by just 0.3 Mbps (0.7%). While T-Mobile US is showing a strong lead in download speed at the moment, this is expected to change as the carriers, particularly Verizon, begin making use of the C-band spectrum (3.7–3.98 GHz) from Auction 107, which concluded in February 2021. In most markets, Verizon and AT&T both secured spectrum in the first-available A-block spectrum, which is slated to be cleared by the end of this year.

When it comes to 5G upload speed, T-Mobile US scored 15.2 Mbps, Verizon placed second with 12.9 Mbps and AT&T scored 10 Mbps. Across the board, users saw their average 5G upload speeds increase by more than 1 Mbps since the January report.

For the most part, the OpenSignal report indicates that T-Mobile US is taking the 5G cake. However, Verizon did shine when it comes to the fastest 5G mmWave coverage, hitting speeds roughly three times that of the other two carriers. Verizon’s 5G strategy from the start has been to focus on mmWave deployment, branding this network as its Ultra Wideband 5G, launched April 2019.

AT&T, too, had its strengths, taking the grand prize for the best 5G video and voice app experience, achieving a score of 65.2, compared to Verizon’s 63.2 and T-Mobile’s 56.5. Further, AT&T tied with Verizon for the best games experience.