RCR Wireless NewsIntelligence on all things wireless.
YOU ARE AT:5GMicrowave mobile backhaul in a 5G world (Analyst Angle) 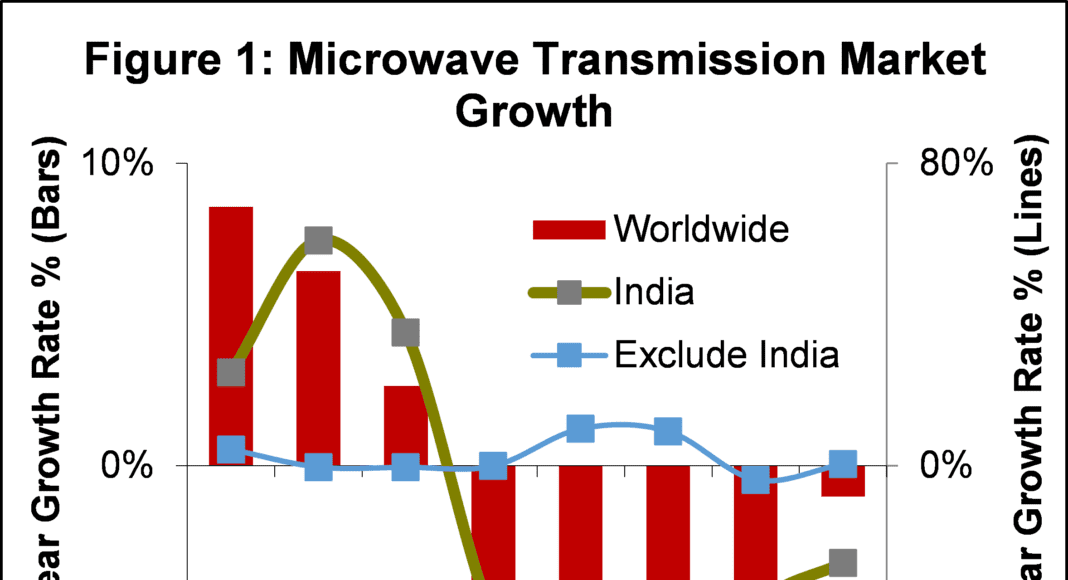 Beneath the surface, 5G is driving demand

The Microwave Transmission market, comprised of point-to-point systems, declined 5 percent in 2019, bringing the market revenue down to $3.2 billion—far smaller than the good days of rampant 4G build outs and upgrades that drove this market’s revenue up over $5.0 billion. Additionally, a decline of 5 percent just as 5G rolls out seems to imply a negative sentiment towards wireless backhaul in the new 5G world or does it? 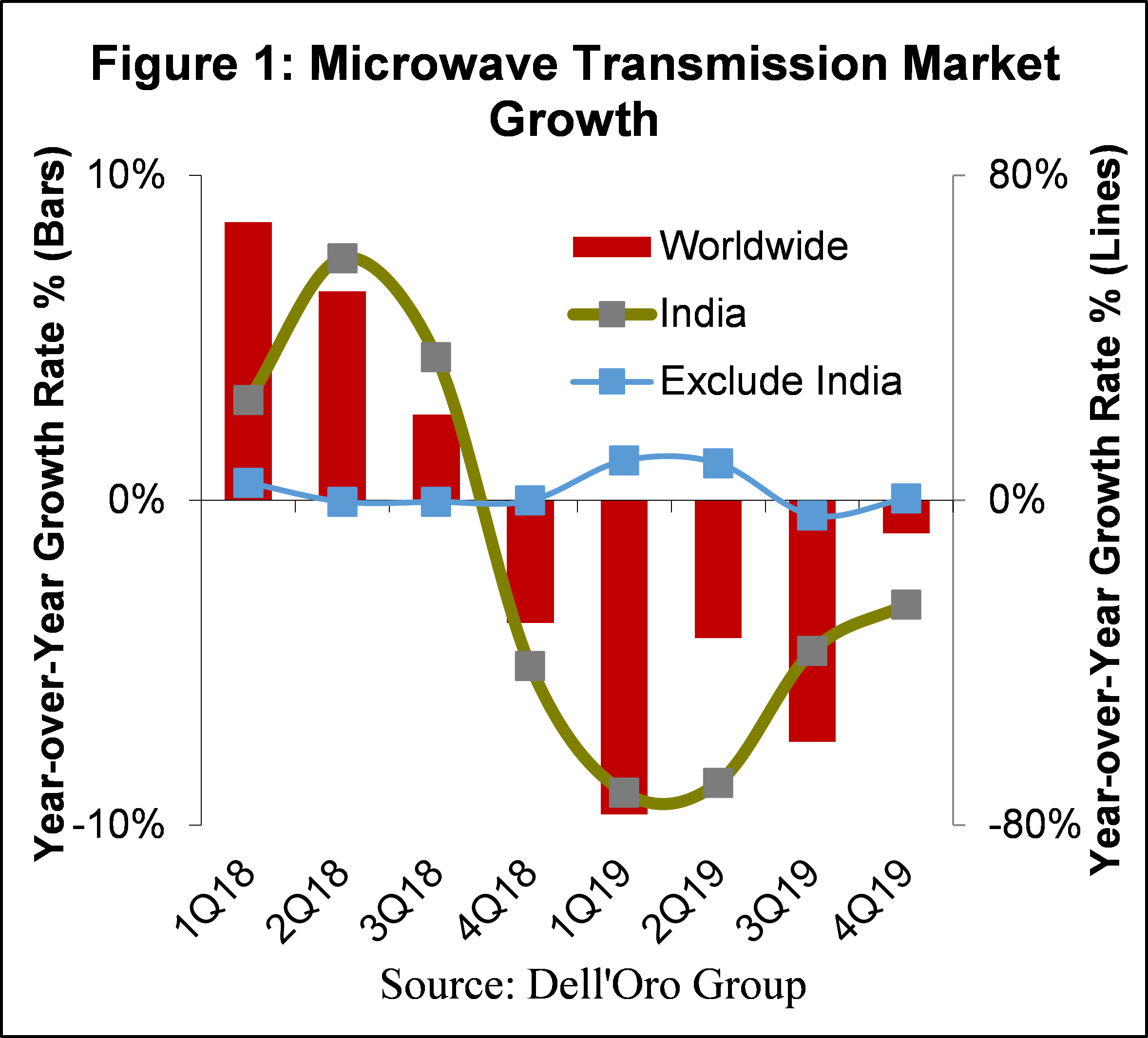 When you dissect the drivers for the 2019 market decline, one thing becomes exceedingly evident (Figure 1). As you can see from this chart, the second largest influence on the Microwave Transmission market has been the events in India (the largest one will always be the timing of new cell site deployments and capacity addition). However, when we remove the impacts of the decline in India, the growth rates show a different story—market demand has been fairly stable and improving since 1Q18. Of course, this isn’t a blanket statement across all countries. There are some countries in the world, such as those in Africa, that haven’t improved and may not this year. However, those countries are also the ones that will likely enter the 5G world later rather than sooner.

Most of the 5 percent market decline resulted from lower sales in India; India declined 60 percent in 2019 due to a slowdown in 4G deployments, accelerated by India’s verdict that a number of operators owe AGR dues to the department of telecommunications. The largest dues have been imposed on two of the largest operators—Vodafone Idea owes Rs 53,000 crore ($7.4 billion) and Bharti Airtel owes Rs 35,586 crore ($5.0 billion). When we exclude India, the market for microwave gear grew 4 percent in 2019—a better indicator for market demand in a 5G world.

What does this mean for 2020? We think India will be less of a negative factor or influencer in 2020 since its revenue in 2019 dropped to such a low level—under $200 million (lowest revenue in past six years)—from an average annual revenue level of $420 million. 5G deployments are ramping up, and while many of the initial sites are leveraging the fixed line infrastructure (fiber-based backhaul systems), we anticipate a growing need for wireless backhaul using microwave equipment. Assuming the coronavirus (COVID-19) doesn’t debilitate network infrastructure roll out, we anticipate the worldwide microwave market will stabilize in 2020 and begin a period of growth aligned with 5G.

Among the microwave technology segments, E/V Band systems (millimeter wave) have the greatest growth potential in a 5G world due to its ultra-high capacity (10 Gbps), small footprint, and low spectrum license fees in certain countries. In addition to these advantages, demand for E-band systems in particular is projected to grow due to the availability of multiband solutions that combine the benefits of standard microwave frequencies with that of E-band. There are of course a number of technical factors that will limit the demand for E/V Band equipment, but we believe the benefits outweigh the costs in many instances. Hence, we forecast E/V Band revenue to grow about 20 percent in 2020. 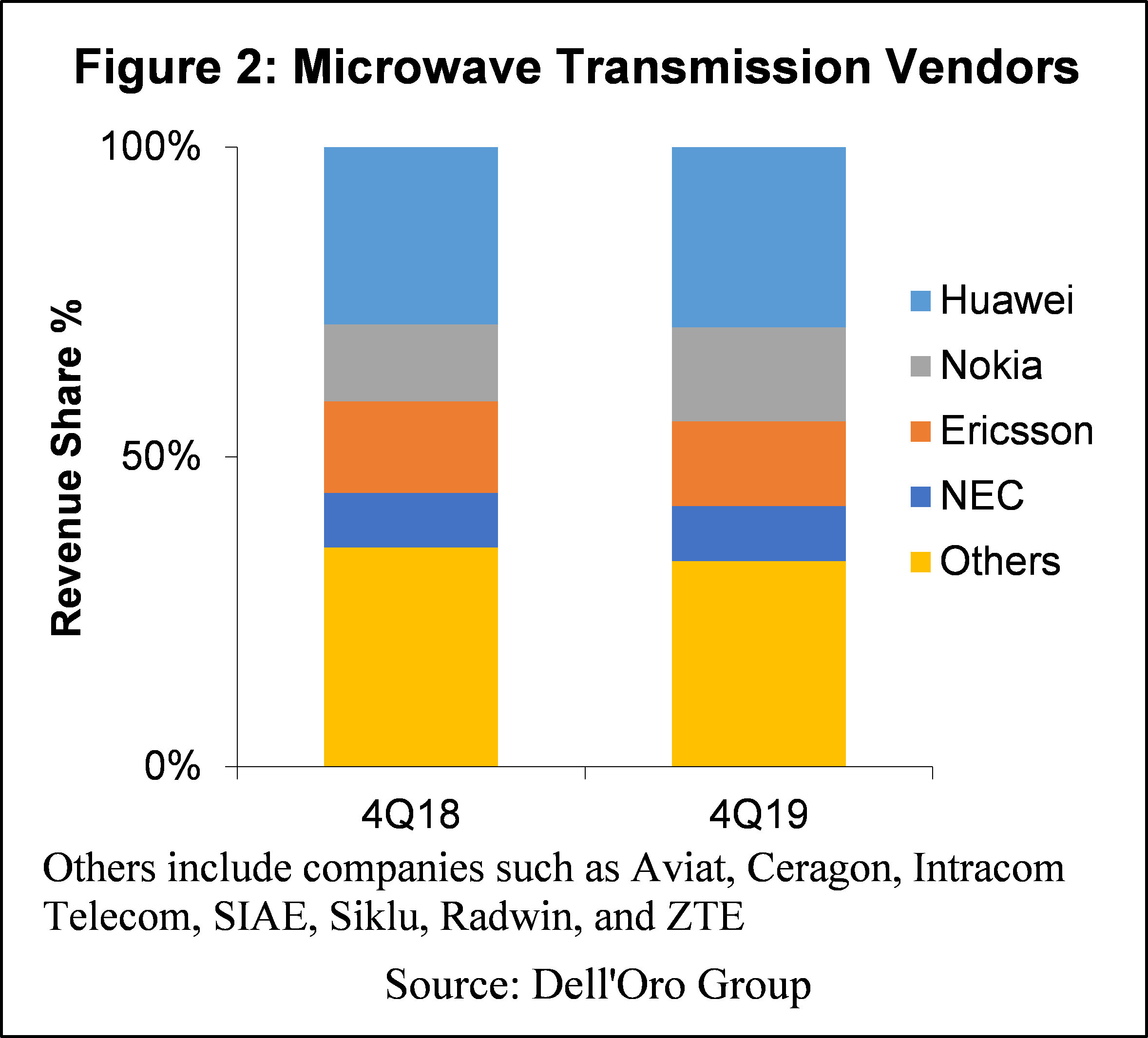 Which system manufacturers benefit? By our calculations, four manufacturers or vendors captured the largest share of the Microwave Transmission market (Figure 2). However, with changing tides, we have witnessed a more fluid market as of late. Huawei continued to hold the largest share of the Microwave Transmission market, garnering nearly 30 percent share in 4Q19. And while this company’s market share held fast, vendors beneath it such as Ericsson and NEC lost some footing due to lower sales into India. So, while typically the top three vendors in this market consisted of Ericsson, Huawei, and NEC, in 4Q19 Nokia overtook Ericsson for the first time and captured the second highest share. The vendor landscape includes other vendors that we think are well positioned, and while that group of vendors, combined, lost some share to these larger vendors, we anticipate at least one or two of them will break away from the pact of Others in the new 5G world.

Jimmy Yu joined Dell’Oro Group in 2001, and is responsible for the Optical Transport and Microwave Transmission & Mobile Backhaul Transport market research programs. Mr. Yu is a recognized authority in his areas of coverage and has written articles in various industry magazines. Mr. Yu is a frequent speaker at industry conferences and events, including OFC, OIDA, Photonics Society, and the Next Generation Optical Networking.