RCR Wireless NewsIntelligence on all things wireless.
YOU ARE AT:5GVerizon and Columbia University use 5G, VR to enable remote experts 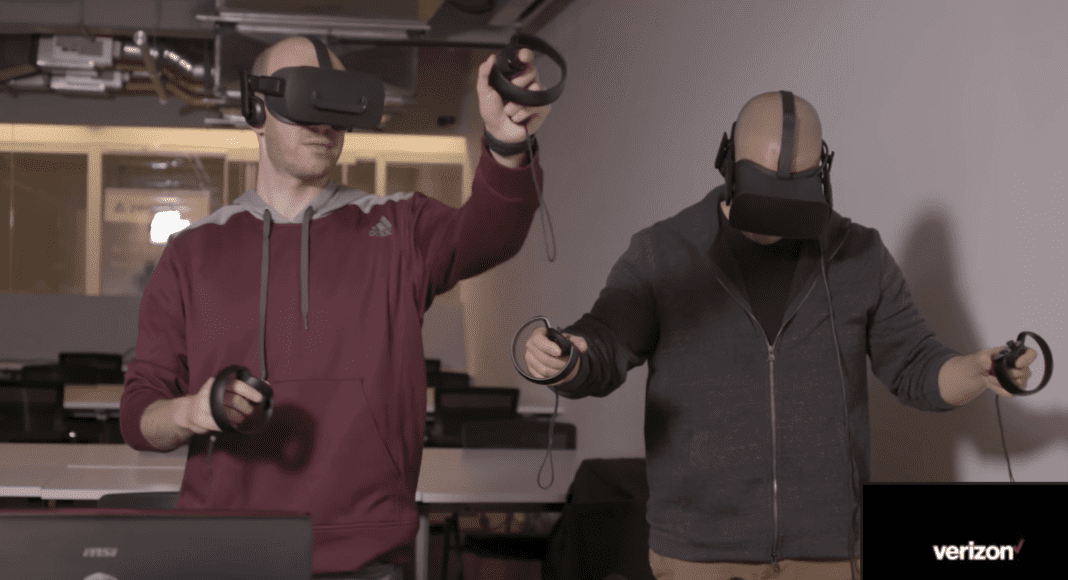 If there is anything Verizon’s experimental 5G node has done in the NYC Alley, it has proven that use cases for augmented, virtual, and mixed realities under 5G are tantalizing — and within reach.

Someone who knows this well is Steve K. Feiner, the Columbia University computer science professor who directs Columbia’s Computer Graphics and User Interfaces Lab in New York City. In the early 1990s, he began his work with augmented and virtual reality (AR, VR) at the lab. He remembers early VR experiments where students wore backpacks connected to head goggles and walked around the Columbia campus. Today the backpacks have been replaced by Wi-Fi, but the goggles remain bulky.

Feiner and his students’ only experience with 5G was testing their VR system at the Alley in Chelsea where Verizon has its pre-commercial 5G installation. They have used the space a half dozen times to test a game-like rehabilitation therapy played by multiple users who work together to keep a ball on a platform, in real time.

“We are very interested in the possibility of networking of this sort that 5G makes available in which latency is extremely low,” Feiner told RCR Wireless News. “And that makes for certain kinds of experiences in which when people are working together, one person does something and the one person, who is not physically in the same place as them, can learn about what that first person did very quickly. “ He spoke in depth with RCR Wireless News this week about his lab’s work at the Alley using 5G.

The Alley is an entrepreneurial hub — a WeWork-type space — where teams and individuals can grow their businesses. Vanderwater Capital Holdings backed Alley in 2015, and Verizon is providing the Alley with physical space as a reuse of some of Verizon’s network buildings that housed older, bulky networking equipment. Verizon and Alley have opened more of these spaces in Washington, D.C. and Cambridge, Massachusetts. Verizon plans to open more 5G lab locations around the U.S. in the near future.

The remote expert is a major use case for Feiner and AR, VR and mixed reality entrepreneurs, such as Arvizio — also using the Verizon’s 5G node in Chelsea Alley. With VR and 5G, a remote expert use case becomes possible.

Feiner noted that traditional rehabilitation means that patients have to be in-residence at a hospital or travel to a therapist’s office, but a remote VR set up. .

“Instead of requiring … people to either be there because they are both in-residence or one person has to travel, you can have a patient who might be at home, for example, working with the therapist, who might be in their office,” Feiner said.

With a 5G connection and two head sets, the therapist and patient could have an interactive therapy session using the rehabilitation game (show in the video below) all done remotely in real time.

What is 5G like to use and how does it compare to wired and 4G?  Number one, don’t compare wired to wireless. “The important thing is not [noticing] a difference between that and wired because a really good wired installation really will be better than wireless, all things being equal,” said Feiner. “But … fiber requires a physical connection, and that is expensive and not what people are normally going to be able to experience.”

Instead, compare apples to apples. “The more important thing is the difference we had between using 4g for example and using 5g, using what you would normally be able to use for wireless connectivity right now and use it for 5G. And that is was major,” said Feiner.

The Columbia University test simply took software already being used in 4G and wired situations at the university’s lab. The students and Feiner came up with the idea for this particular software. They may get a chance to try it in a real clinical setting in soon. They selected this rehabilitation therapy project because it would dramatically show the use of 5G.

“There are other things that we are very interested in my lab that I think will work better in 5G but could work pretty well in 4G, which we didn’t pick for this project because we really wanted something that would be more dramatic,” said Feiner in describing why they selected the rehabilitation project to try out.

4G won’t work for these remote expert use cases and for wider adoption of VR/AR/MR, Feiner said.

“A game like this that is being played in real time, [high latency] doesn’t work. If your experience is wonderful one second and then it gets bad once a minute, the last thing you want to do is play a game where every 60 seconds it basically stops,” Feiner said. “Nor do you want to watch a movie that way. Think about how frustrating it would be if you were watching a movie, a very high-resolution movie and every minute it stops and gags for basically for a second or two. That would just take you completely out of the experience.” While content such as movies can deal with latency through buffering, he noted, “with an experience like this, people are interactively doing things with each other. You can’t buffer stuff up. People are working in real time. They are not doing stuff in advance,” said Feiner.

“In the work that we do, the remote expert can see a virtual copy of that environment, can watch what the technician is doing but could also grab hold of a virtual copy of something and early make a clone of it that the remote expert can then control to show that let’s say the local technician how to position it into place: kind of rotate it, translate it, attach it to something that it needs to be attach it to. So they can be talking, explaining verbally but they are also explaining visually. So the local technician can see this copy in their field of view, because they are wearing a head-worn display, they can see the real environment and they also can see the virtual copy that is being manipulated by the expert,” explained Feiner.

Feiner’s students did a demo of the remote expert at SigGraph — a large geographics conference that takes place every year.

“We did a demo last year of an approach we have taken to that problem: how the remote expert can help the local technician live performing a task. That is something that would also benefit from 5G, but I think it would be something that would be harder to make it a night-and-day type of difference as we are able to do with the rehabilitation,” said Feiner.

Right now, companies are deploying AR in some industrial situations. Feiner is hesitant to make predictions about the state of VR/AR/MR.

If the price can come down on headsets and some of them can be more social acceptable — perhaps look more like everyday glasses — we may see more people adopting AR/VR. Right now, high-end smartphones do a good job with AR for things like tourist programs where you can overlay a historical image or fact over a real place, such as for a walking tour. However, 5G may make the difference that tips people over into using AR regularly.

Feiner hopes his group can continue to use the Alley. “I have asked the folks at Verizon yet again when do we actually get 5G here [at Columbia]. They are not saying yet,” said Feiner.