RCR Wireless NewsIntelligence on all things wireless.
YOU ARE AT:Analyst AngleProject AirGig: What is it really and why do you care? 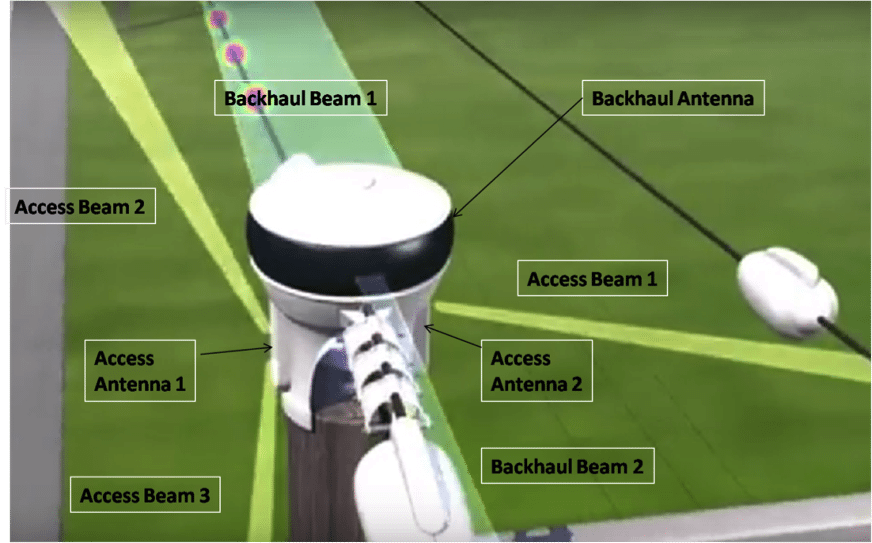 Project AirGig: What is it really and why do you care?

When announced in October 2016, Project AirGig was described as being “transformative” using license free spectrum and power lines to provide the urban, suburban and rural markets with multi-gigabit ultra broadband internet service. The key words are license free spectrum and NOT the power lines. The technology essentially leverages the locations of existing wooden telephone poles that are seen in every U.S. neighborhood. These poles serve utility companies as well as telecom and cable operators. In AT&T’s case, the pole provides a physical location to place a radio access unit for the surrounding area.

License free spectrum within the United States can be the following frequency bands:

We believe that the bands that are most suitable for this specific application are the 24GHz and the 60GHz bands. There is 200MHz of license free spectrum available at 24GHz within the United States. Currently, there are PTP radios available for backhaul applications in this band.

AirGig radio node antenna
The AirGig antenna which is part of the radio node plays a key role in how the solution works. The antenna design uses twelve 60GHz horn antennas, each with a fixed 30 degree beamwidth, to cover a 360 degree area. These horn antennas are solely for providing backhaul transport for the radio nodes. Using the full 14GHz of bandwidth would allow for multi-gigabit backhaul throughput for each AirGig radio node. The twelve horn antenna array is required in case the adjacent radio node is not in a straight line path. 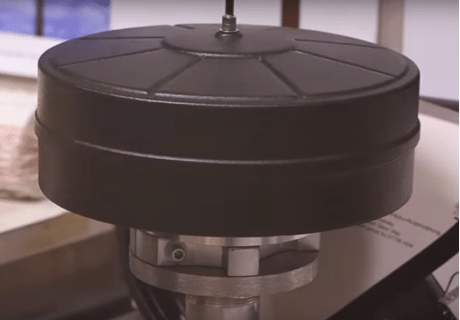 As shown in the exhibit below, the exploded view of the AirGig antenna system shows the twelve horn antennas behind the plastic shroud. 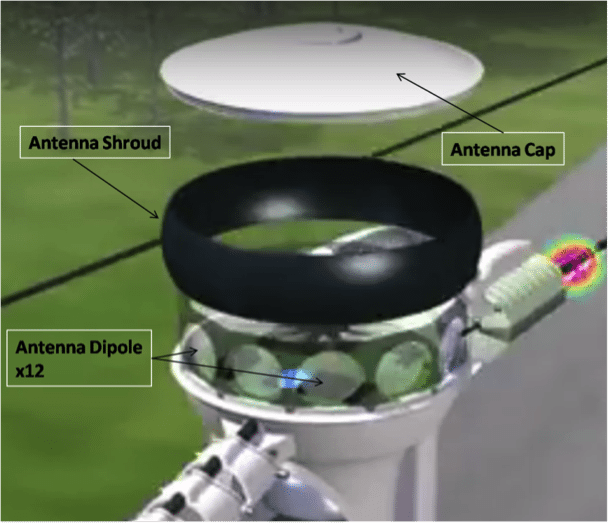 From a top view perspective, we illustrate how the antenna array is placed within the radio node. 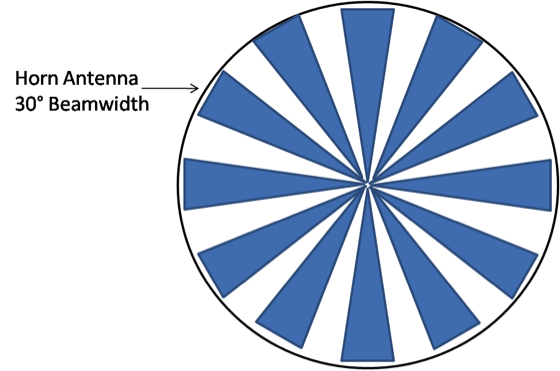 We believe that there are four main components of the AirGig radio Node:

The exhibit below illustrates two access antennas that would beam IP traffic to individual homes or businesses. We believe that these antennas are also at the 60GHz frequency band and may be fixed as a passive wide sector antenna or may use an array of fixed smaller beamwidth antennas. It is unclear if there is any active beam steering capabilities within the AirGig radio node given currently available information.

The power conversion unit taps off the 48VDC power from the telephone line and conditions it to provide power for the radio node transceiver and backhaul. We assume there is enough current capability to provide enough power to support both the radio node as well as the backhaul radio.

The downlink path is converting the 60GHz signal into an Ethernet packet and then taking the Ethernet packet from the backhaul radio into the modem and the transceiver and then sending out at 60GHz through the access antennas to corresponding customer premise equipment (CPE) nodes receiving the signals at 60GHz. Once the CPE has received the 60GHz signal, it can either transmit at 60GHz inside the residence using 802.11ad or downconvert to 5.8GHz and transmit using 802.11ac or connect to a LTE-A/LAA/LTE-U femtocell unit and transmit wireless broadband using licensed/unlicensed frequencies to the end users’ smartphones, tablets, laptops, television, or IoT devices.

Summary:
Ultimately, the AirGig radio node/backhaul mode may allow AT&T to quickly deploy ultra broadband wireless services with multi-gigabit throughput using totally free unlicensed spectrum, courtesy of the FCC and without spending any money on tower or city/local government leasing fees. Other mobile competitors such as T-Mobile and Sprint would be at a severe disadvantage depending on their ability to secure access rights to the telephone poles and in providing power. Verizon Wireless, which is also a utility like AT&T could develop a similar solution as well as Comcast or other cable operators who have access rights to the telephone poles.

Additionally, having the right of way would also allow AT&T to deploy 5G radio nodes on the telephone poles as well, supporting licensed 24GHz, 28GHz, and 39GHz spectrum radios. 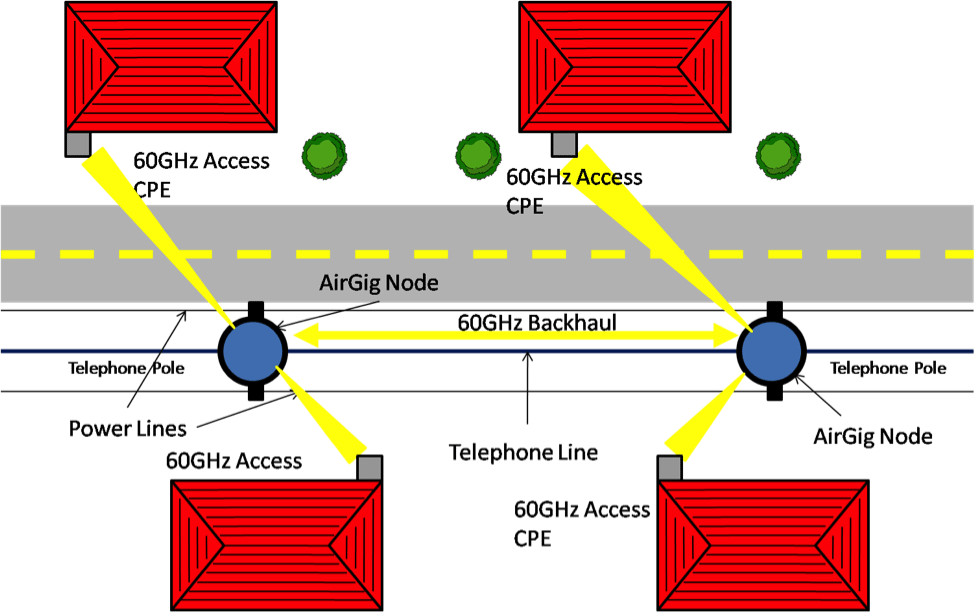