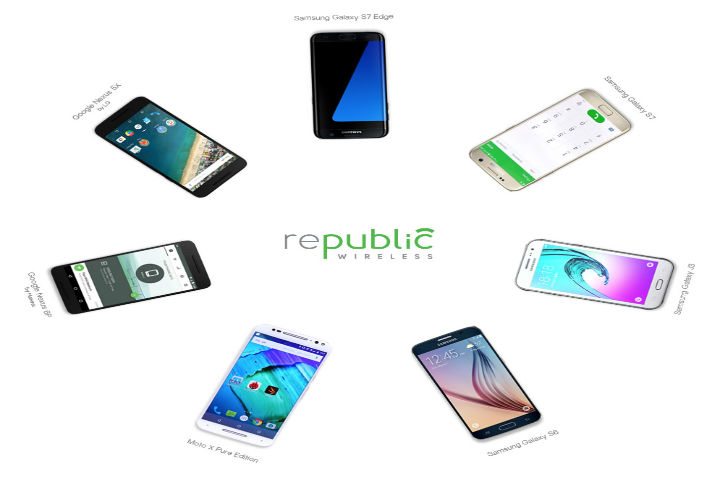 MVNO Republic Wireless said it plans to add 7 GSM-based smartphones in July, to go along with plans for a GSM-based cellular partner

Wi-Fi-first mobile virtual network operator Republic Wireless continues to bolster its service offering, announcing plans to add new smartphones to its device lineup and again hinting at expanded cellular coverage from a GSM-based mobile carrier.
Republic said beginning in July, it plans to offer news devices from Samsung, Huawei, Motorola and LG, which will join its current offering limited to just a pair of Motorola devices. The new phones are set to include the Samsung Galaxy S6, S7, S7 Edge and Galaxy J3; Huawei Nexus P3; LG Nexus 5X; and Motorola X Pure Edition. The phones are available for outright purchase, ranging from $179 for the Galaxy J3 to $799 for the Galaxy S7 Edge, or through Republic’s recently launched device financing program. The MVNO said it plans to add more lower-priced devices compatible with its Wi-Fi-first technology in the coming weeks.
The new devices are said to be compatible with Republic’s soon-to-launch GSM-based roaming partner, as well as its Wi-Fi calling service. Republic currently relies on Sprint for its cellular coverage, having initially launched with the carrier in 2011. The firm last year said it planned to add a second cellular carrier by the end of 2015, which now looks to be nearly in place. Rumors suggest T-Mobile US will be the GSM-based carrier in question.
Customers selecting one of the new devices and resulting access to a new cellular carrier will also have new rate plans to choose from. Republic said an example of those plans includes unlimited voice calling, text messaging and one gigabyte of unthrottled cellular data for $20 per month.
Google’s Project Fi service, which is seen as a keen competitor to Republic Wireless, charges $20 per month for unlimited domestic talk and text, unlimited international texts and tethering. Users can add data for $10 per gigabyte, and Google issues a bill credit each month for any unused data. The Google service also relies heavily on Wi-Fi connectivity, as well as cellular coverage from Sprint and T-Mobile US.
Republic Wireless last month unveiled a “bonded calling” technology it says can combine cellular and Wi-Fi signals in real time to improve service quality. The carrier said the technology, which is part of its Adaptive Coverage technology platform, can patch in cellular connectivity when it detects “sub-optimal” Wi-Fi network conditions, resulting in “higher quality conversation” and extending indoor coverage. Republic noted in testing the technology has resulted in a 52% increase in Wi-Fi call quality and 209% increase in service quality at the edge of a Wi-Fi network. The technology, which is baked into Republic’s platform and available to all customers, builds on its previous work in supporting the handoff of voice calls between a cellular and Wi-Fi connection.
Bored? Why not follow me on Twitter