RCR Wireless NewsIntelligence on all things wireless.
YOU ARE AT:BusinessKagan: Sprint under Verizon Wireless' skin 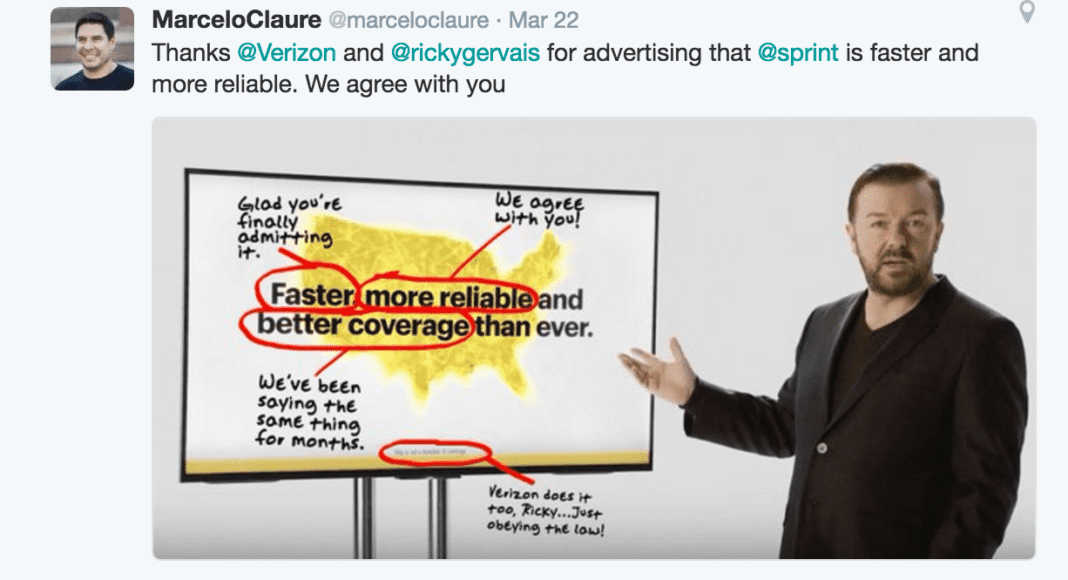 It looks like the Sprint recovery must be impacting Verizon Wireless’ business because they are now using comedian Ricky Gervais in their advertising to take swings at Sprint. Who would have imagined that was coming? Maybe it’s time we start paying closer attention to Sprint once again.

One of the best ways to see who is battling who in a competitive marketplace is to watch the advertising. Until now, Verizon Wireless has not paid much attention to Sprint. Until now, Sprint wasn’t a threat. Until now.

In a press release, Sprint said its ability to get Verizon Wireless’ attention, whether negative or positive, was a sign of just how far their network has come. They said this is a sign Verizon Wireless is feeling the heat and is a clear acknowledgement Sprint’s network is now a strong competitor.

This may just be the beginning of a period of back-and-forth between Sprint and Verizon Wireless. It will be interesting to watch it play out. One thing is for sure, it’s nice to see this battle is being fought without resorting to foul toilet language others use … not to mention any names.

Sprint recovery having an impact

So it seems the Sprint recovery is starting to have an impact. When you compare market after market over the last couple years, you can see them getting better, faster and stronger. I talk about the growth wave and look at different events on this wave. About how it starts and climbs until it eventually crests then falls. About how important it is to not only understand the growth wave, but to use it to grow your company.

Verizon Wireless has a great network, but customers must pay more to use it. Sprint’s network has been improving for years. Today, they are a wireless competitor at a much lower cost to the customer. This is the kind of choice the wireless marketplace wants and needs.

I think we will always be happier with four, major, strong, growing carriers. That’s better for the carriers, for investors, for workers, for customers and for the entire wireless industry. So AT&T Mobility, Verizon Wireless, Sprint and T-Mobile US … keep up the great work!