RCR Wireless NewsIntelligence on all things wireless.
YOU ARE AT:CarriersAT&T Mobility adds no-contract option to Mobile Share plans, extends Next 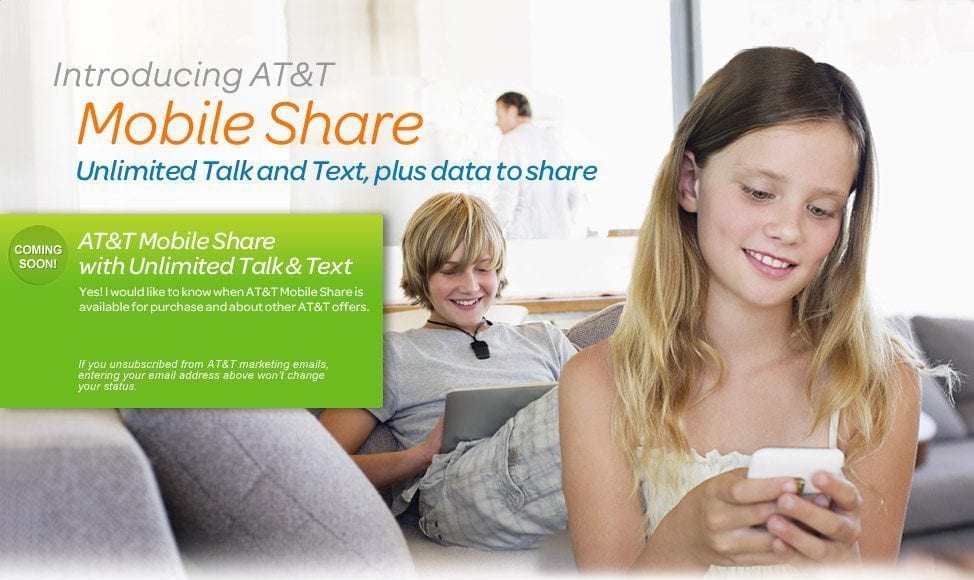 AT&T Mobility is set to tweak its Mobile Share plans, tacking on the “value” label to differentiate the new plans that are set to launch Dec. 8.

The tweaking will now allow customers to select a no-contract option that the carrier said will save smartphone users $15 per month compared with the current Mobile Share plans. That savings is tied to consumers selecting AT&T’s Next option, which calls for customers to make monthly payments towards the full price of a mobile device; bringing their own smartphone to the plan; purchasing a smartphone at full retail price; or when a device is no longer under contract and the customer switches to the new “value” offering.

The value offering begins at $45 per month for a single smartphone line with access to unlimited calling, messaging and 300 megabytes of data. Customers can sign up additional smartphone lines to share the data bucket for $25 per month; add a “basic or messaging” device for $20 per month; or can add a tablet for $10 per month. Customers looking to start a plan with just a basic or messaging device can tap into unlimited calling, messaging and 300 Mb of data beginning at $40 per month.

The non-value plan charges smartphone users $70 per month for the same unlimited voice calling, messaging and 300 Mb of data, while adding more smartphones to share the data bucket ranges between $30 and $50 per month depending on the size of the data bucket. Customers signing up a basic or messaging device can begin a plan for $50 per month for unlimited voice calling, messaging and 300 Mb of data, with additional basic or messaging devices charged at $30 per month. Tablet pricing remains the same at $10 per month as AT&T does not subsidize tablets.

To further promote its Next program, AT&T said it was adding an 18 month upgrade option that will be available for up to four smartphones per account and will spread the payments on those devices over a 26 month period in a move to lower the per-monthly costs. Customers will be able to get a new smartphone after 18 monthly payments for no down payment, no upgrade fee, no activation fee and no financing fee. The current Next program, which was launched in July, spread payments over a 24 month period and allowed customers to upgrade their device after 12 months.

AT&T had initially launched its Mobile Share plans in mid-2012, offering a bucket of data that is to be shared across multiple devices, along with unlimited voice and messaging. The plans were similar to the family data share plans introduced by Verizon Wireless, though AT&T Mobility noted that the new offerings will be merely an option for new customers, and not a requirement.

AT&T had announced in October that all new customers will be required to sign up for rate plans that include data services that can be shared across multiple devices. In a statement posted on its “consumer blog,” the carrier explained how popular its Mobile Share plans have been since launched in August 2012, and that due to that popularity all customers would now be required to select one of those plans when starting a new line of service. To bolster its popularity claim, AT&T Mobility claimed that “our postpaid customers have connected more than 13 million devices via Mobile Share plans.” AT&T did note that at the end of the second quarter approximately 90% of its postpaid customer base were on either a legacy FamilyTalk, Mobile Share or business-related plan.

The updated Mobile Share plans come as the domestic industry continues to focus marketing efforts on reducing device subsidies and doing away with contracts tied to rate plans. This model, which has been the staple of traditional prepaid offerings, was kicked off by larger operators earlier this year when T-Mobile US unveiled its JUMP program. Most rivals have since unveiled their own variation on that model.