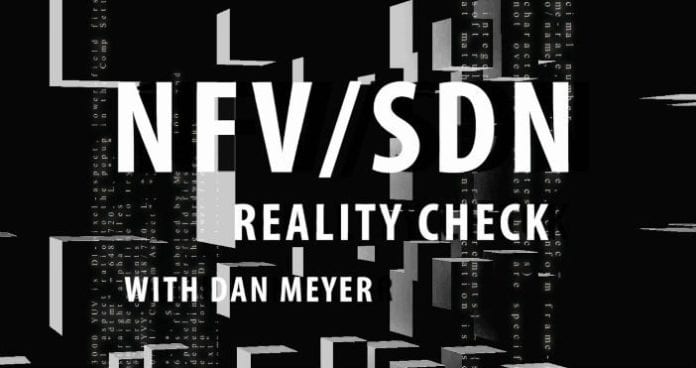 This week’s NFV/SDN Reality Check looks at top headlines from AT&T and Verizon, and we speak with OPNFV on latest NFV trends

On this week’s show we have a featured interview with Heather Kirksey, director of the Linux Foundation’s OPNFV organization, to get an update on its work in the open-source NFV market and trends coming out its recent OPNFV World event.
But first let’s take a look at some of the top news from across the NFV and SDN space from the past week.
AT&T had a busy week, announcing first the latest expansion of its SDN-based Network Functions on Demand service to 76 countries and territories. Initial services being offered include Juniper Networks virtual routing, Cisco virtual router, Fortinet virtual security and Riverbed virtual wide area network optimization.
The Network Functions on Demand service is the third service rolled out by the carrier over its growing SDN platform, which the company said would control 75% of network functions by 2020. AT&T launched its initial Network on Demand service early last year, pushing the platform to more than 100 cities across the U.S., and claims more than 1,200 business have signed up for the solution.
AT&T this week also announced a deal with European-based telecom group Orange to work on open source and standardization initiatives linked to the carrier’s push toward increasing control of its network resources using SDN and NFV.
The agreement calls for both operators to align on “a strategic vision to move intelligence from customer hardware to the network” in a move designed to trim costs and complexity. The firms said they will work with “appropriate” forums for standardization discussions, which they claim can eventually lead to shorter deployment cycles and a faster pace of development.
Specific areas of focus named include the creation of common specifications for premise-based devices to work in different network service provider environments and network function software providers; work designed to streamline the onboarding process for virtual network functions; and the development of standardized APIs in support of interoperable SDN architectures.
Also this week, Verizon’s Enterprise Solutions division launched its Virtual Network Service in its latest move in furthering its SDN and NFV technology plans.
The telecom operator said the enterprise-focused platform is designed to support the migration towards a virtual infrastructure model, and be available to companies worldwide through an “as-a-service” model. Verizon noted the service would enable enterprises to take into account various locations and staffing requirements, network service and bandwidth requirements and support security needs, which are not possible with current hardware-based platforms.
As for deployment models, Verizon said it would offer three options: a premises-based universal customer premises equipment; a cloud-based virtual CPE service available later this year; and a hybrid version that allows for a mix of premises-based and cloud-based deployments.
The company claims support can be delivered across public, private and wireless networks provided by Verizon, other service providers or a combination of multiple providers across multiple networks. Initial services include security, wide-area network optimization and SD-WAN services.
Partners in the program include Cisco Systems, Juniper, Fortinet, Riverbed, Palo Alto and Viptela, with the carrier noting plans to name more vendor partners down the road.
For this week’s featured interview, we spoke with Heather Kirksey, Director of OPNFV to get an update on the Linux Foundation-based organization’s work in the open-source NFV market and trends coming out its recent OPNFV World event.
Thanks for watching this week’s show, and make sure to check us out again next week when we are scheduled to speak with Jeff Gray, CEO of Glue Networks.
Bored? Why not follow me on Twitter