RCR Wireless NewsIntelligence on all things wireless.
YOU ARE AT:5GActive antennas are essential to 5G deployments (Analyst Angle) 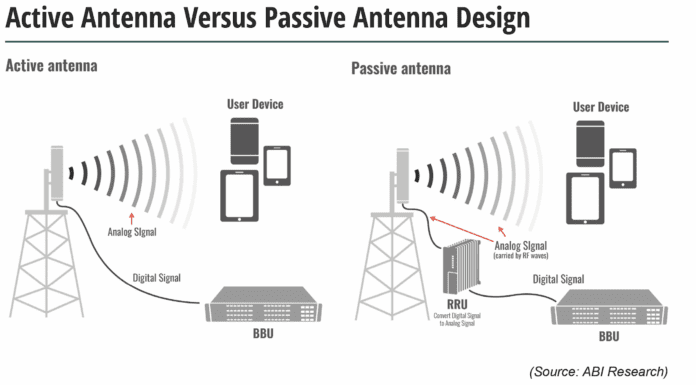 The base station antenna is an increasingly complex and essential part of the mobile network as networks evolve to 5G. The evolution from 3G to 4G and now to 5G has enabled increasing sector throughput rates and it is the base station antenna that has to hand off the traffic to the airwaves. The rollout of 5G mobile networks in the 3.5 GHz band (C-band) has highlighted the importance of active antennas, in particular Massive Multi-Input Multi-Output (MIMO) active antennas, to deliver the data throughput performance in terms of capacity expansion, ultra-precise beamforming, and individual end-user throughput. Three-Dimensional (3D) beamforming, which can provide high gain and steerable beams, not only improves signal coverage but also reduces costs due to the subarray requiring less power and less costly high-power amplifiers. ABI Research forecasts world-wide mobile data traffic to reach 2,700 exabytes annually by 2025. As data traffic increase exponentially, ABI Research expects active antennas to become an increasingly important tool for Communication Service Providers (CSPs).

The telecommunications industry including Original Equipment Manufacturers (OEMs), such as Ericsson, Huawei, Nokia, and ZTE, as well as standards organizations, and industry associations, such as the Institute of Electrical and Electronics Engineers (IEEE), ITU Radiocommunication Sector (ITU-R), 5G Americas, and NGMN Alliance, have contributed to the development and standardization of active antennas. Based on the contributions that are currently available from industry stakeholders, there has been a broad range of definitions used for what an “active antenna” represents. In terms of terminology, active antennas have variously been written as “Active Base Station Antenna,” “Active Antenna System,” “Advanced Antenna Systems,” or just “Active Antenna.” ABI Research feels it was necessary to clearly define and differentiate between active and passive antennas for a consistent terminology and reference across the industry.

What is an Active versus Passive Antenna?

In terms of deployment and implementation, passive antennas have been historically deployed for 2G, 3G, 4G, and 5G in rural, suburban, but also urban areas. However, especially for 5G technology, active antennas are more suited to be deployed in both urban and dense urb

an areas due to the high population density, high data consumption, demand for high throughput, space constraints, and challenges arising from high-rise buildings.

The use of active antennas can provide enhancements to CSPs’ operations through lower operational costs from more efficient networks while producing an optimal user experience. Apart from the benefits of active antennas, there are some market factors that can further drive their adoption. These include the increased access to spectrum asset bands such as the 3.5 GHz band, the expanding global cellular data traffic demand, active antenna’s technological advantage in delivering reduced latency and improved energy efficiency, massive MIMO capabilities, development of solutions to overcome physical cell site space limitations, and the implementation of more cost effective and power efficient signal processing algorithms.

There are, however, certain potential inhibitors that are important to note. On the technological end, the occurrence of pilot contamination can limit the actual throughput achieved while also posing a challenge when it comes to channel estimation. There is also the added interference caused by the large number of Massive MIMO radio antennas, as well as various other user equipment (UEs) transmitting signals along different transmission paths. On the market front, the choice of frequency bands, cost of active antenna products with large number of antenna array combinations (e.g., 32T32R or 64T64R), and cell site technical aspects in the form of physical space, power supply, and wind load requirement, are considerations that have to be factored into the implementation of active antennas.

Despite the technological and market inhibitors, active antennas, in particular Massive MIMO active antennas, are crucial in realizing the potential of 5G with its beamforming capabilities and in achieving enhanced spectral efficiency. ABI Research expects active antenna shipment units to reach more than 7.3 million in 2025, growing at a CAGR of about 32.2%. Active antenna revenues are forecasted to reach approximately US$56 billion by 2025, growing at a 5-year CAGR of 27.2% from 2020 to 2025. The average cost of active antenna will continue to come down, which will drive up sales in the short- to mid-term, but sales volume is expected to taper around 2025.

In summary, active antennas have the capabilities to further enhance 5G deployments and enrich experiences for customers. In addition, the potential growth of the active antenna market presents an opportunity for industry organizations, CSPs, OEMs, and other stakeholders to facilitate and capture that growth. However, it is important for the telecommunications industry to have a common and standardized definition of what constitutes an “active antenna” and how it differs from a “passive antenna.” This will improve integration and implementation while speeding up widespread adoption of active antennas.