RCR Wireless NewsIntelligence on all things wireless.
YOU ARE AT:Network InfrastructureTech at the track: How NASCAR is using fiber, wireless and big... 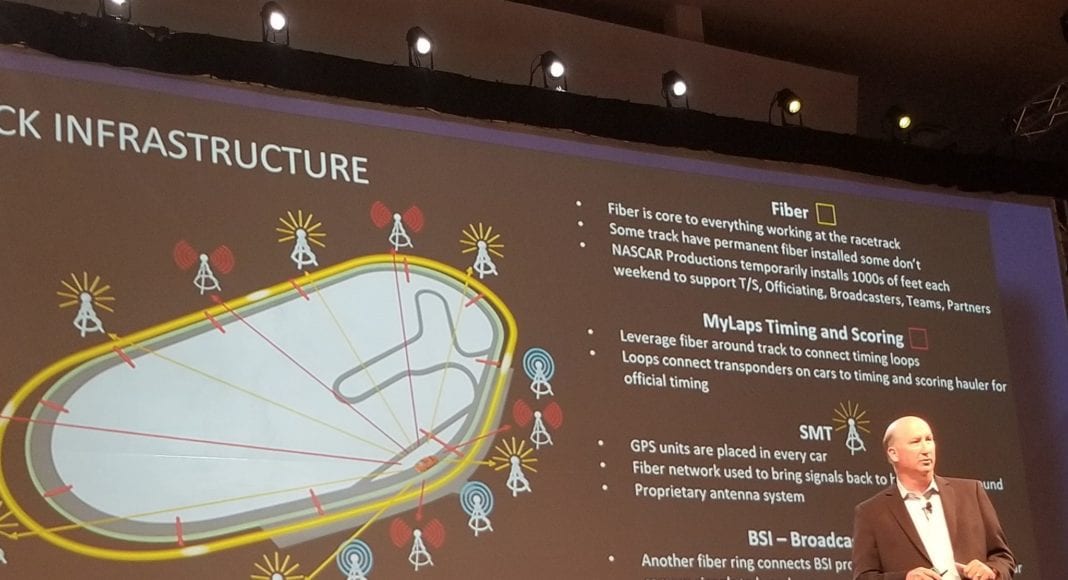 Tech at the track: How NASCAR is using fiber, wireless and big data

CHARLOTTE, N.C.–Just a few hundred yards from the NASCAR Hall of Fame, Steve Worling gave the audience at the Connectivity Expo an insider’s view of the racing organization’s network and IT infrastructure.

Worling, managing director for information technology at NASCAR, said that the sport has about 80 million fans worldwide and is typically the number-two sport on television each weekend during its season, which runs from February to November. He showed an image of the NASCAR network operations center at a track and compared the group’s IT operations to picking up and moving a large office building each week — because, he pointed out, races move from track to track. Track facilities, which are unused most of the time, are unlikely to make large capital outlays on fiber and wireless infrastructure, he said — so NASCAR and each individual team have to bring their own.

NASCAR lays tens of thousands of feet of fiber at each facility and brings a cable head-end with it, and the organization has to deal with a complicated radio frequency environment including distributed antenna systems and hundreds of Wi-Fi networks set up by the venue and the teams, Worling said.

“We always joked around that you could walk into a NASCAR garage and probably see the worst RF environment on the face of the planet,” he said. “So You’d walk in, you’d take an analyzer out and you’d see 400 or 500 wireless networks at any one given time. Just crazy.” He added that NASCAR has begun offering connectivity services to teams so that they don’t need to set up their own networks and is interested in looking at technologies such as 5G and private LTE through CBRS in order to increase its ability to manage its networks.

Worling also laid out how NASCAR has started to use mobile applications to streamline its work and collect data, such as the pre-race inspections that each vehicle must go through. The organization has logged about 500,000 inspections since 2015, he said. Those inspections used to be tracked on paper that was locked away in a cabinet after each race, so there was no ability to track and analyze the information. Now NASCAR uses a mobile app for the inspections, Worling said, which has cut inspection time in half and provided a wealth of data to help identify issues with the cars.

Watch an excerpt from Worling’s presentation below: