RCR Wireless NewsIntelligence on all things wireless.
YOU ARE AT:Carriers5 key takeaways from the T-Mobile US 2Q call 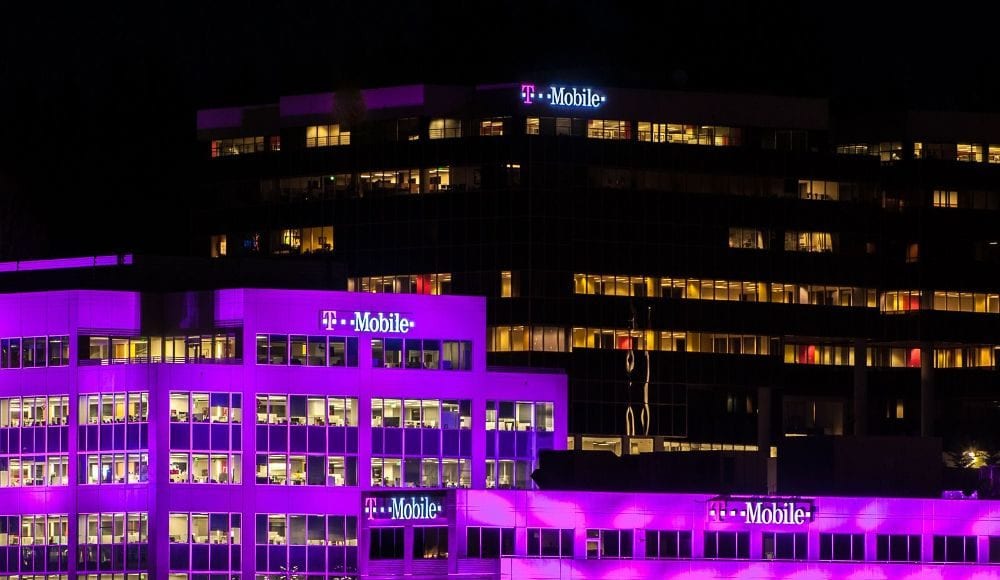 5 key takeaways from the T-Mobile US 2Q call

T-Mobile US announced its second quarter results last week, adding 1.3 million subscribers with service revenues up 8% and postpaid churn at 1.1%.

T-Mobile US executives had a wide-ranging discussion with analysts to discuss both the numbers and the carrier’s strategy and accomplishments in a number of areas. Here are highlights from the T-Mobile US 2Q call:

T-Mobile is making inroads in the enterprise market, for which it credits its network expansion and improvements as well as its enterprise-focused customer group.

T-Mobile US CEO John Legere — between praise for his own company and swipes at competitors — said that 40% of Fortune 1000 companies are now T-Mobile US customers and that the carrier is making strides in capturing enterprise customers. T-Mobile US has its At Work Group that focuses on enterprise customers, and Legere said that the group “contributed its highest share of postpaid customers ever.” He went on to add that T-Mobile US’ market penetration there and in the public sector are still very low, so it has room to grow, particularly as it expands both its geographic retail locations and its network. The rate of growth for T-Mobile US’ At Work Group was more than twice that of its consumer business during the quarter, Legere said.

The operator continues to expect its first 600 MHz sites to be on-line late this summer.

Legere echoed T-Mobile US plans from earlier this year to begin using its newly won 600 MHz spectrum as quickly as possible. The carrier expects that spectrum covering more than 1.2 million square miles will be clear and ready to use yet this year, “with actual deployments in many areas by year-end,” Legere said. The first 600 MHz site will be lit up next month. T-Mobile US has said previously that it expects to have rapid access to 10 MHz of spectrum covering more than 1 million square miles, and that it anticipates network equipment from Ericsson and Nokia will be available. The operator said that it expects that devices with 600 MHz support will arrive from Samsung and other manufacturers later this year as well.

The carrier expects LTE in unlicensed to play a major role in its network, is working on small cell densification and interested in spectrum in the 3.5-4 GHz range.

Neville Ray, CTO for T-Mobile, said that the carrier is “full bore on exploring 5 gigahertz on unlicensed LTE and LAA” and made note of the carrier’s recent LAA testing. T-Mobile US achieved speeds of 741 megabits per second in the downlink in those tests.

“That’s not going to be seen everywhere,” Ray said of LTE in unlicensed, “but the opportunities in terms of how to grow capacity and capability on this network are endless for us.” In fact, he added later in the call, “what we are working towards is that every small cell, come fourth quarter of this year, that we deploy would be leveraging unlicensed LTE in the 5 GHz band.”

In terms of spectrum resources, Ray said that for 5G, T-Mobile US would like to see more millimeter wave options opened up and it “will push on the regulatory front to make sure that that happen.” He went on to say later that he has “huge interest in the 3.5 gigahertz block” and that he considers the 3.5 to 4 GHz range “the most formative block of spectrum emerging globally for 5G.” T-Mobile US has asked the federal government to look at opening up additional spectrum on top of the 3.5 CBRS band, he added.

T-Mobile US is densifying its network as well. Ray said that T-Mobile US acquired “about 13,000 … DAS nodes/small cell equivalents” through its purchase of MetroPCS and also has “well over 2,000” traditional and new small cells — and that number will “hit about 8,000 by the end of the year” with an additional pipeline of more potential sites. Ray specifically mentioned the Los Angeles market, where he said T-Mobile US has more than 1,000 small cells turns up, to the point that the carrier is “actually now starting to see one of the full network benefits: micro network offload, speed enhancements, really good numbers coming through when you get a material volume of small cells on the ground in a key urban and metro environment.”

T-Mobile US is on a store-opening blitz this year and thinking strategically about the role of online or digital sales.

The carrier is working through its plans to open 1,500 new T-Mobile-US-branded stores this year as well as 1,500 MetroPCS retail locations, in order to expand its retail presence from “covering two-thirds of the country to three-thirds of the country,” as Legere put it. T-Mobile US recently opened its 1,000th new T-Mobile-branded store of the year and expects to have almost 17,000 retailed locations around the country by the end of the year. Mike Sievert, COO for T-Mobile US, told analysts that most of the increased performance from new retail locations will start coming in 2018 and that they should expect to see impacts to gross additions and net additions. Sievert also said that T-Mobile US has been putting in new technology and looking at partnerships for online customer interactions and that “an increasing number of our total transactions are purely digital,” although he offered no specific details on that front.

“There is work to be done in this entire industry before consumers shift wholesale into the online world, and our view is that the industry needs to be radically simplified,” Sievert said. He said that T-Mobile US wants to make retail locations “more interesting” and “a better showroom for our brand, turning it into a fulfillment center for online-first transactions and having people come to us for what we do best, which is provide our knowledge and expertise.”

On the question of consolidation, “the noise to action ratio is zero” at the moment.

Legere started off by saying that “the anonymous source fax machine to Bloomberg.com has been very busy in the last quarter” and emphasized that the carrier has a thriving standalone business.  He went on to say that T-Mobile has “the same but maybe more opportunities, from an inorganic or an expansion standpoint, than we had last quarter” — as in, not much has changed in the overall landscape. In terms of the frequent rumors that are surfacing, Legere noted that the 600 MHz auction meant that companies couldn’t talk to each other — during which T-Mobile US focused on its auction position — and that “the reason [rumors] catch fire is that the concepts have a shred of the philosophical, the academic things that we’ve been talking about.” Since the quiet period ended, Legere added. “what we are doing is, we have been very thoughtful, very methodical [and] very judicious about how we decide how to expand our business and act in a fashion that is consistent what is best for our shareholders and customers. …

In general, he added about the various industry rumors, “the noise to action ratio is zero.”

In the context of cable companies deciding to have exclusive discussions with Sprint,Legere posited that it “would seem logical that one of the things that a cable company would want to talk to Sprint about is an MVNO” and commented that “it wouldn’t be my first choice to arm the cable players with a tool that could help them be more competitive.”

Still, he made clear that he thinks convergence is inevitable. “have been very clear that I believe over time these industries are all coming together anyway,” Legere said. “Customers are going to drive a ubiquitous look across all of technologies for you to get together and provide them a seamless experience, having their content available to them wherever they are.”