RCR Wireless NewsIntelligence on all things wireless.
YOU ARE AT:Fundamentals3 enterprise in-building wireless trends to watch 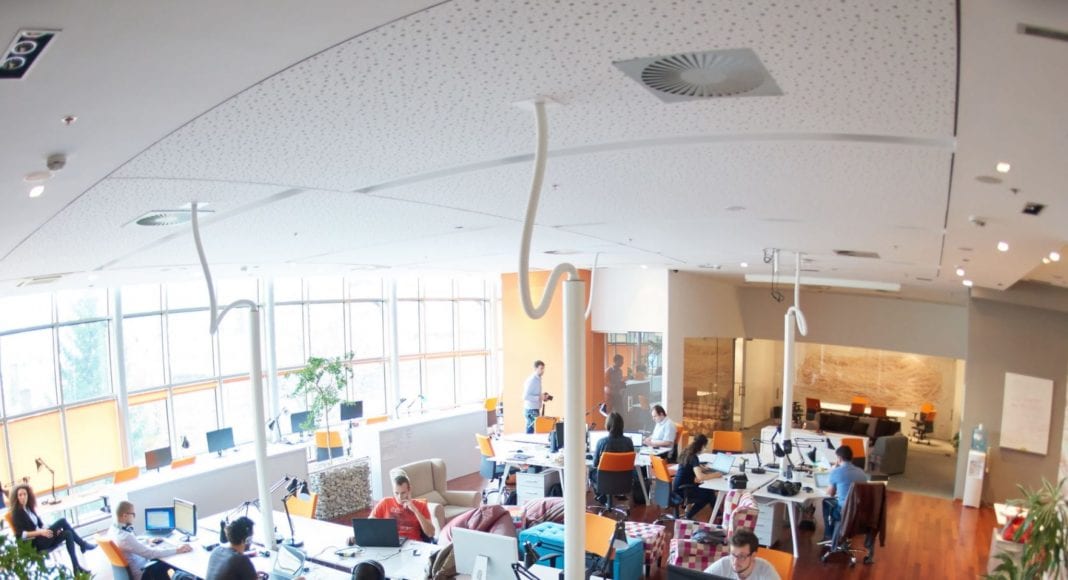 Many marquee venues like stadiums and airports already have in-building wireless connectivity systems, often an active distributed antenna system (DAS), that provides multi-band, multi-carrier support — albeit at considerable expense. These types of systems are often funded by carriers or neutral host providers. However, for smaller buildings like hospitals, retail centers and other enterprise spaces, the return isn’t attractive enough to draw carrier investment, which is increasingly putting the impetus on building owners and enterprises themselves to solve for in-building wireless connectivity. Here we look at three trends in the vendor community that are impacting the way cellular is provisioned indoors, where the majority of mobile traffic originates.

Acquiring a baseband unit from a carrier and installing it to support an active DAS system is a huge cost and time element associated with a deployment–this isn’t something an enterprise can unilaterally do. This has given rise to a hybrid approach to distributing signal throughout a building. Instead of the baseband unit, a small cell is used as the signal source to feed the distributed antennas of the DAS. With Verizon Wireless recently asking its DAS suppliers to integrate SpiderCloud Wireless small cell units into their systems, there’s growing interest in this hybrid approach to serving the enterprise space with coverage and capacity.

Using a small cell to provide a signal source for a DAS makes the radio part of the DAS vendor’s equipment, and could help meet pent-up demand for in-building wireless by lowering the price point to facilitate the shift in capital expenditure from the carrier to the end user. “This allows the enterprise to get a guaranteed signal source and distribute it with the DAS system if they choose to do so,” said Verizon’s Dennis McColl, the principal engineer who heads up the carrier’s in-building business. “The DAS systems themselves are meant to mimic an air interface so there’s really no reason why a DAS cannot be applied to the SpiderCloud radio node. It’s not easy,” he continued. “DAS systems are certainly not easy. They’re the most complex, underestimated piece of equipment or architecture in the wireless landscape.”

Luigi Tarlazzi of CommScope, one of Verizon’s DAS vendors, said he sees “opportunities for our small cell platform to feed our DAS platforms. What I can tell you is that we have different options available in our solutions, and I think there is kind of a simple approach just using the small cell as the RF radio source. We feel like there are additional opportunities, specifically for us, to really have tighter integration between our small cell platform and our DAS platforms. We are definitely looking at this. I can’t share our roadmap, but we feel we are very well positioned.”

Small cells provide connectivity at a much lower cost than an active DAS, but come with some limitations. Chief among those obstacles is the lack of broad availability of multi-carrier small cells that could support a common infrastructure, which has a straight line correlation to ease of install and building aesthetics among other important factors, such as enabling a wider range of neutral host deployment models.

At the recent Small Cell Forum event, Ip.access took home an award for “outstanding innovation in small cell business case” for its Super Multi-Operator solution, which enables shared access small cells. According to ip.access, with SUMO “each access point broadcasts multiple PLMN codes on the same spectrum and all users see the AP as a cell within their home network. A policy based resource scheduler in the AP allocates capacity and bandwidth according to predefined rules managed via SLAs. The Viper gateway then securely routes all traffic to the appropriate core network for each operator.”

In the recent report titled “Multi-Carrier Small Cell Solutions for In-Building Wireless,” Wireless 20/20 analysts Randall Schwartz and Berge Ayvazian write, “The critical question is which solutions can provide the multi-carrier capabilities needed for most venues at a cost point which can encourage a faster rate of deployment. While small cells can meet the cost-points required for in-building coverage, they have been challenged to provide coverage for more than one carrier at a time. But new virtualized small cell solutions have become available that can face the challenge of addressing the economic and multi-carrier requirements of the small and medium size venues.”

Another player in this space is Baicells, which made a splash at Mobile World Congress this year by touting the “first real” small cell for neutral host or multiple operators. Called NeutralCell, the company says the multi-operator solution delivers “a single small cell that can be used by multiple operators. NeutralCell meets the requirements of communication systems from different operators for the frequency band and transmitted power. Neutral host service providers can deploy NeutralCell at a site and then deliver wireless service at the facility to various operators by renting this station to them. In this way, operators can resolve the difficulty in the arrangement of special sites, save on building and operation costs, and build up their networks quickly.”

Taking the cost out of DAS

SOLiD Technologies, which has labeled the “middleprise” as buildings between 100,000- and 500,00-square-feet, is working to address this valuable market through an innovative take on DAS: GENESIS, which provides a multi-carrier solution, but further shifts ownership to the venue owner and provides a marketplace for carriers to purchase capacity back from the system owner. “It’s a totally new approach to in-building wireless where the building owner outfits their properties with affordable, new generation DAS solution, including the signal source component,” according to the company. SOLiD Americas President Ken Sandfeld called GENESIS a “game-changer.”

“The reason [the middleprise] hasn’t been solved for so long is, it has been a very unbalanced relationship between the building owner and the carrier” Sandfeld said. “What we’ve done is we’ve brought a solution set together…which brings in business models, as well as software technology and hardware technology. We’re essentially flipping supply and demand on its ear. No longer will a building owner have to talk to the carriers about supply base station equipment and trying to entice them into doing something in the building. The building owner will have complete control of the solution and will ultimately become a capacity supplier to the carrier.”