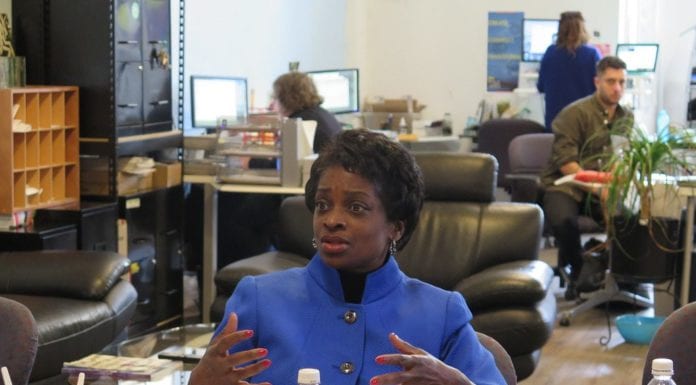 Clyburn, in a plenary session during the Wireless Infrastructure Association’s annual event, described a recent trip Los Angeles’s Skid Row neighborhood, a portion of downtown LA that’s home to one of the largest static populations of homeless people.

“I took a visit a couple of weeks ago to Skid Row in Los Angeles,” she said. “There’s some very bright people there, but life has not been so kind. One person said to me if they did not have the internet, if they did not have an email address, they would have no address at all. I bring that up to show how important connectivity is. I believe we all benefit when there’s an open platform. I don’t know what the future will bring, but I hope it will be one where those underlying principles of free…open internet will remain. I’m hoping cooler heads will prevail and we get to a place where the American people will continue to benefit from all the opportunities of an open platform, a free platform, an inclusive platform.”

Earlier this month the District of Columbia Circuit Court of Appeals declined to review its decision upholding open internet rules, citing the fact that the FCC has announced plans to repeal the rules. Led by Chairman Ajit Pai, who was elevated to the leadership role by President Donald Trump, the FCC is in the midst of preparing a notice of proposed rulemaking that will explain how it wants to eliminate net neutrality laws. Pai has said the NPRM will seek comment on how the FCC should roll back the existing law. The agency proposes to return the classification of broadband service from a Title II telecommunications service to a Title I information service. In addition, the FCC wants to eliminate the so-called internet conduct standard — the standard the FCC used to warrant its investigation of T-Mobile’s Binge On and other services that offer consumers zero-rated data from select content platforms. Those investigations are on hold. Thirdly, the FCC is seeking comment on how it should approach the so-called “bright line” rules, which ban blocking of content, throttling and paid prioritization.

“A lot of that will depend on the direction that the chairman takes,” Clyburn said in response to a question asking whether there’s an opportunity for a compromise that keeps some of the current net neutrality rules in place. “There’s so many potential moving parts. We will wait to hear and see how that docket is built. There is always ‘legislative backslide’ that could emerge.”

She continued: “If I could see into the future, I promise you I would be richer, thinner and owning some tropical island. What I know is anything we have been the beneficiaries of in terms of this enabling platform did not happen by accident. It happened because there was a framework laid out. People keep forgetting, all these things that enable you to build, enable us to connect, enable us to be more prosperous, all these things came about because there were clear rules to the road.”

Clyburn returned to her Skid Row example. “they will not have the type of assurances I believe are need to take part,” if net neutrality is repealed. “We’ve got think about the consequences of basically saying your internet service providers will conduct themselves,” as they see fit, a position floated by Pai.