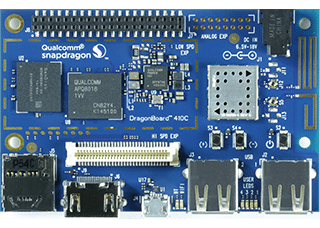 Enabling the internet of things

Many of the applications and devices set to drive future sales of wireless hardware have not yet been invented and no one knows this better than semiconductor companies. Wireless chip designers Qualcomm, Gemalto and Intel have created internet of things development boards to help makers and software engineers experiment, innovate and ultimately bring their ideas to market.

Projects undertaken to date with the Qualcomm board include an audio-controlled drone and a camera-equipped hat for the visually impaired that gives audio narration about the environment. The chipmaker is working to build a community that is actively inventing and sharing ideas. (The “c” in 410c stands for “community.”)

Software support for the DragonBoard 410c stretches from the device to the cloud. At the operating system level, the board is compatible with Android, Linux and Windows 10 IoT Core. Middleware support includes Qualcomm’s AllJoyn, IBM Watson IoT and Robotics OS. Cloud services that work with the board include AT&T M2X, AWS IoT, IBM Bluemix and Microsoft Azure IoT. In addition, users can add a mezzanine board to make the 410c compatible with Arduino.

Developers can use the board to create a “chip-down design” that can be implemented by purchasing the $16 Snapdragon 410E processors directly from Arrow. They can also use the board to prototype designs that will be implemented using single board computers or system on modules that use the 410E processor. Qualcomm’s ecosystem of IoT hardware providers includes development kits made by Inforce, Variscite, eInfochips, Intrinsync, Keith & Koep and Ka-Ro.

Intel’s Galileo and Curie
Intel has already launched two generations of its Galileo development board, which can be used as a client or a server. The board measures 123.8 millimeters by 72 millimeters and is powered by Intel’s Quark SoC 1000X processor. The board is compatible with the Arduino UNO R3 pin configuration so developers do not need extra hardware or software in order to attach an off-the-shelf Arduino-compatible shield to the Galileo board.

Curie is powered by Intel’s 32-bit Quark SE system-on-chip, which is said to be ideal for always-on applications, and can use a smartphone or Intel Bluetooth gateway to connect to the internet. Intel is planning a software development kit for Curie designed to enable developers to run a real-time operating system on the module.

Gemalto’s Cinterion Concept Board and Cinterion Connect Shield
Gemalto’s board is said to be ideal for developers who want cellular connectivity as it includes the company’s Cinterion M2M 2G/3G connectivity module, which supports voice, is compatible with Arduino and can be programmed using Java.

This year, Gemalto launched the Cinterion Connect Shield for developers who want to use LTE Category 1 connectivity with Arduino. The shield attaches to Arduino boards and includes an LTE Cat 1 modem with 2G fallback, a basic set of sensors and an external antenna. Gemalto plans to migrate the shield to narrowband IoT technology during the second quarter of 2017.

Gemalto says the Cinterion hardware provides the security and extended battery life needed for industrial IoT applications, smart cities, agriculture and other use cases that require connectivity for devices that are difficult to access on a regular basis.

Executives from Qualcomm, Gemalto and Intel were featured speakers at the Enterprise IoT Summit in Austin, Texas. They joined executives from AT&T, Verizon Communications, Texas Instruments, and Telit in the IoT development kit content stream.