RCR Wireless NewsIntelligence on all things wireless.
YOU ARE AT:CarriersTelcos look to Open Compute Project for speed, innovation 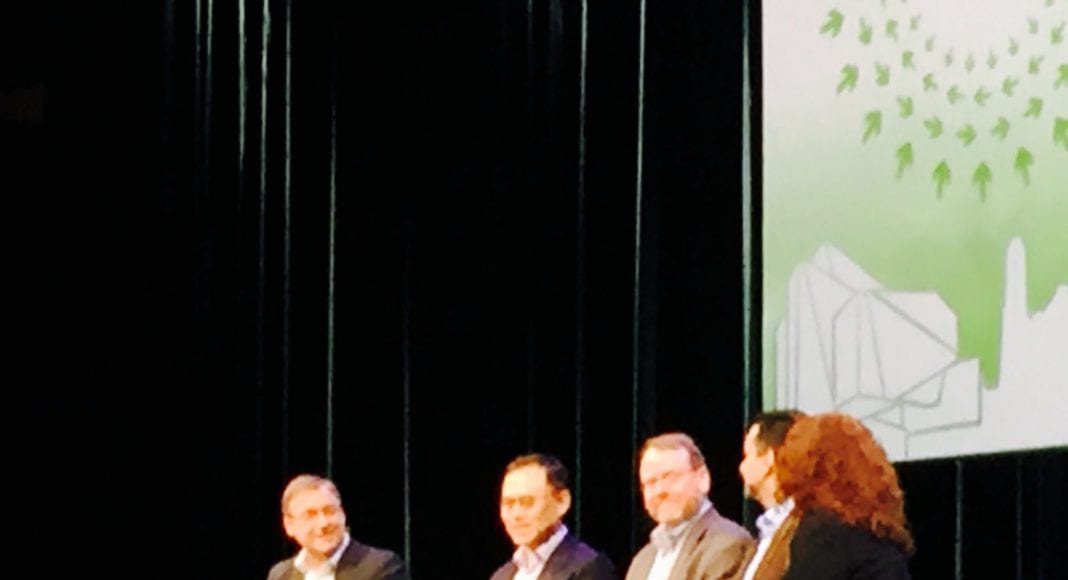 AT&T AVP says openness is a ‘matter of survival’

SAN JOSE, California – After developing its niche in the hyperscale community, the Open Compute Project is now being embraced by telecom service providers looking to bring new services to market quickly and at scale.

Hosted by Rachael King from The Wall Street Journal, panelists came back time after time to the centrality of “driving innovation at a much greater speed,” as Daneil Brower, VP chief architect of infrastructure cloud for DT, put it.

“In our case,” said Ken Duell, AVP of new technology product development and engineering at AT&T, “it’s a matter of survival. Our customers are expecting services on demand anywhere they may be. We’re finding that the open source platform … provides us a platform to build new services and deliver with much faster velocity.”

Verizon SVP and CIO Mahmoud El Assir hit on the ability of open source to create true network personalization for customers, and the historic focus was on speed and supporting various protocols on the same network.

“Now it’s exciting that the telecom industry, the networking industry, everything is becoming more software,” El Assir said. “Everything in the network becomes more like an app. This allows us to kind of unlock and de-aggregate our network components and accelerate the speed of innovation. … Getting compute everywhere in the network, all the way to the edge, is a key element for us.”

El Assir added Open Compute Project-based switches and routers will allow for “personalized networks on the edge. You can have your own network on the edge. Today that’s not possible. Today everybody is connected to the same cell. We can change that. Edge compute will create this differentiation.”

Kang-Won Lee, director of wireless access network solution management for SK Telecom, looked ahead to “5G” and the various high-capacity use cases that will usher in a new type of network that will require white box hardware due to cost models.

“It was more about the storage and the bandwidth and how you support people moving around to make sure their connections don’t drop,” Lee said. “That was the foremost goal of mobile service providers. In Korea, we have already achieved that.” With 5G the network “will be a lot of different types of traffic that need to be able to connect. In order to support those different types of traffic … it will require a lot of work. That’s why we are looking at data centers, white boxes, obviously, I mean, creating data centers with the brand name servers is not going to be cost efficient.”

So what about Verizon and AT&T, fierce rivals in the U.S. mobile market, sharing research; how does that work?

“Our current focus is on the customer,” El Assir said. “I think now with what OCP is bringing to the table is really unique. We’ve moved from using proprietary software to open source software and now we’re at a good place where we can transition from using proprietary hardware to open source hardware. We want the ecosystem to grow in order for the ecosystem to be successful.”

“There’s a lot of efficiencies in having many companies collaborate on open source hardware,” Duell added. “I think it will help drive the cost down and the efficiency up across the entire industry. AT&T will still compete with Verizon, but the differentiation will come with the software. The hardware will be common. We’ll compete on software features.”