RCR Wireless NewsIntelligence on all things wireless.
YOU ARE AT:Internet of Things (IoT)IoT era dawns for NFL with player-tracking sensors 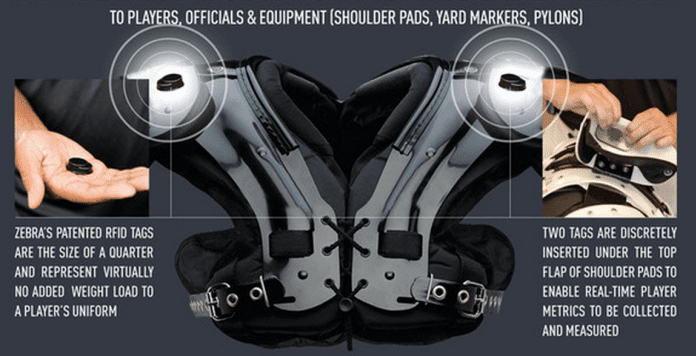 The way NFL teams gather in-game statistics is about to change dramatically with the help of the “Internet of Things.”

When the defending Super Bowl champion New England Patriots take on the Pittsburg Steelers in Gillette Stadium to open the 2015 season, the teams will be wearing sensors that will track where players are on the field, their speed, distance traveled and acceleration more accurately than ever before.

Coaches, fans and broadcasters will have access to data collected through quarter-sized radio-frequency identification sensors embedded in player’s shoulder pads that connect with 20 receivers all around the stadium.

The NFL will use the technology to power a new app for Xbox One and Windows 10 that will connect the fan with the game like never before. The app uses “Next Gen Replay” that will allow fans to access stats in conjunction with highlights.

“We’ve always had these traditional NFL stats,” Matt Swensson, senior director of Emerging Products and Technology for the NFL said. “The league has been very interested in trying to broaden that and bring new statistics to the fans. Along the way, there’s been more realization about how the data can be leveraged to make workflow more efficient around the game.”

All 31 stadiums throughout the league will be equipped with the technology that will also allow coaches to evaluate players like never before.

The IoT platform, powered by Zebra Technologies, has been around since 2013. Since then, data from more than 17,000 plays has been collected and more than 1.7 billion XY player coordinates have been measured and stored. This will be the first time that every NFL team will have access to the technology.

This is the year, some of the data will finally make it into TV broadcasts, Swensson says. The NFL plans to use the data as part of its Thursday Night Football broadcasts on CBS. It will also be integrated into the NFL’s web offerings on NFL.com and the league’s fantasy football sites.