RCR Wireless NewsIntelligence on all things wireless.
YOU ARE AT:CarriersT-Mobile US coverage map taps crowd-sourced data 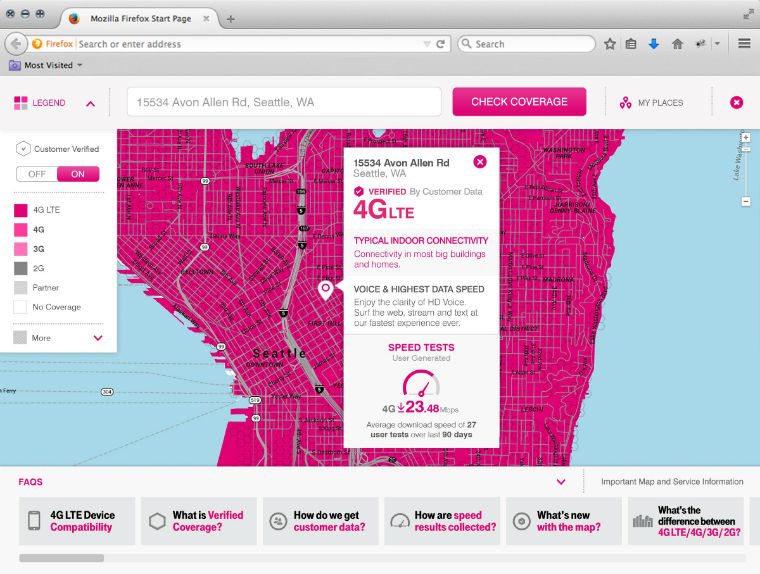 Perhaps tired of being dinged for inferior network coverage compared to some of its rivals, T-Mobile US rolled out new crowd-sourced coverage maps that it claims provide a more comprehensive look at the reach of the carrier’s network.

T-Mobile US claims the new maps provide more “transparent and accurate” measurements of LTE, 3G and other levels of coverage; a “verified coverage” icon that shows “where the majority of data is provided” by T-Mobile US customers reporting their actual network experience; coverage maps that are updated twice per month; and speed-test data from third-party applications showing average download speeds over the past 90 days. T-Mobile US has frequently touted network speeds through a partnership with Ookla.

T-Mobile US has seen considerable success in third-party speed testing, but has seen its overall network coverage pale in comparison to rivals Verizon Wireless and AT&T Mobility. T-Mobile US claims its LTE network covers 265 million potential customers, compared to more than 300 million pops by the market’s two largest players. T-Mobile US is looking to hit the 300 million pop mark by the end of this year by tapping into 700 MHz licenses it acquired from Verizon Wireless and other operators.

T-Mobile US has attempted to cure the in-building coverage challenges of the 1.7/2.1 GHz and 1.9 GHz spectrum that powers most of its network by tapping into Wi-Fi for both voice calling and data needs, which were at the heart of its Un-carrier 7.0 announcement last year.