RCR Wireless NewsIntelligence on all things wireless.
YOU ARE AT:EMEAEMEA: A few ways Europe is getting 'smarter' 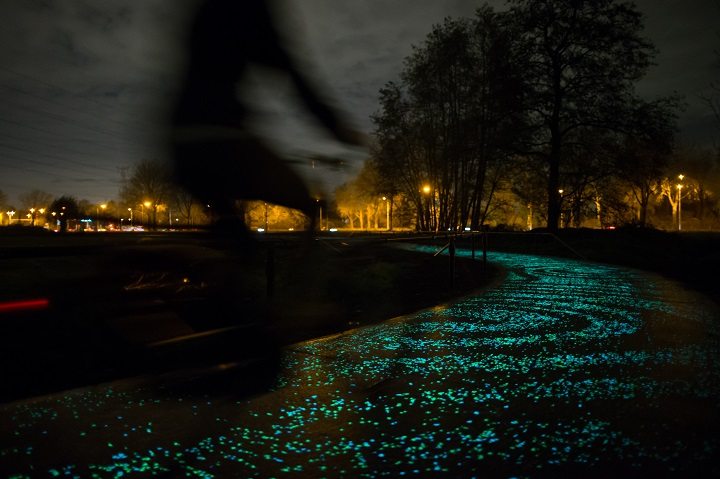 EMEA: A few ways Europe is getting ‘smarter’

Smart solutions are being used for a range of projects in Europe, from the fantastical—like Van Gogh-inspired bike path in the Netherlands (above) to the very practical—smart meters, smoke detectors and trash cans. And it’s not just single, separate projects, but broad, complex efforts to employ smart functions such as tracking the activities of one of Europe’s busiest ports or improving citizen services of entire cities.

But first about that sparkly Dutch innovation: Artist Daan Roosegaarde designed a path filled with special light emitting stones that glow at night in patterns inspired by Van Gogh. The technology used in the path was first developed by Roosegaarde and the construction firm Heijmans for a “smart highway” that will have interactive lighting designed to provide drivers better visibility at night and pavement that changes patterns to indicate icy conditions. A pilot project debuted in Oss, Netherlands, in October featuring glowing lines.

Not too far away, the city of Copenhagen, Denmark, is also using a type of smart lighting in its goal to become the first carbon-neutral capital city in the world by 2025. The city has deployed smart LED street lamps and sensors working on a wireless network. The lights are designed to help bicyclists better navigate the city, inform truck drivers when a light will turn red and in some areas turn the lighting up or down as a car passes by. The plan is to use the sensor data to help make a host of city functions more effective and efficient, including trash pickup, salting roads and traffic enforcement.

In Hamburg, Germany, which sits on the Baltic Sea, the city is looking to transform itself into a “smart port.” Smart, to Jens Meier, the Port Authority’s management board chair, means the “intelligent exchange of information to increase the quality and efficiency of the port.” In an article for the industry news site Port Strategy, Meier said the Hamburg port is establishing its intelligent infrastructure with a host of technology including Bluetooth, Wi-Fi, cloud, mobile end devices as well as taking advantage of the “Internet of Things” and big data. Working with partners SAP and Deutsche Telekom, the port presented a logistics pilot project to Chancellor Angela Merkel in the fall, but this is a project that has been developing for some time. The port started creating measuring points to capture traffic volumes, vehicle types and speeds back in 2010.

On the individual home front, smart meters are gaining in popularity. Berg Insight predicts that 70% of Europe’s electricity customers will have them by 2022. At the end of 2014, there were 67.9 million such meters, representing a penetration rate of 24%. This is boosted by the fact that some countries, such as Sweden, require them.

However, it’s not all smooth sailing into the smart future. Despite the advance in metering, Berg Insight said that Europe is two to three years behind North America in the development of its market for smart homes, which have comprehensive smart systems including metering, lighting and security. And even the adoption of smart meters is hampered by resistance from the otherwise energy-conscious Germany, which argued that the meters were too costly for consumers. Privacy concerns can also scrap projects as evidenced by the huge dust-up in London in 2013 over smart garbage cans that were also tracking the cellphone signals of people walking by.

Despite the hurdles, much of Europe appears dedicated to developing and deploying more smart solutions. A European Commission program on smart cities has more than 370 commitments involving 3,000 partners across the continent to fund and develop smart solutions in energy, ICT and transportation. That’s a lot of players on a continentwide effort, which should help put Europe on the smart glowing highway to the future.

How using IoT for testing toxins is improving water quality

Sigfox to launch internet of things network in Singapore