RCR Wireless NewsIntelligence on all things wireless.
YOU ARE AT:CarriersClaure to replace Hesse as CEO at Sprint, consolidation stance softened 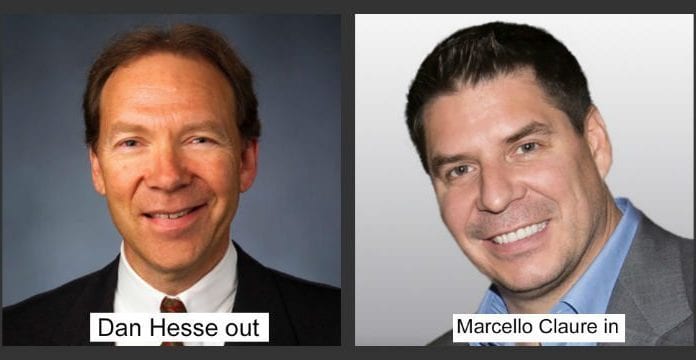 Following a late afternoon flurry of rumors, Sprint this morning announced it was replacing current CEO Dan Hesse with Brightstar CEO and founder Marcelo Claure. The move is set to become effective Aug. 11.
The move is the most serious shakeup at Sprint since Softbank acquired control of the U.S. carrier last summer. Sprint has continued to flounder operationally, which has gained considerable attention from Softbank Chairman Masayoshi Son who has aggressively tried to import his aggressive management style of Softbank into Sprint, which sources have told RCR Wireless News has caused serious consternation among Sprint employees.
Claure had been on Sprint’s board of directors following Softbank’s acquisition last year of a controlling stake in Brightstar for $1.26 billion. As part of Claure taking over the reins at Sprint, Softbank will also be acquiring Claure’s remaining stake in Brightstar. In his new role, which will be based in Sprint’s current Overland Park, Kan., headquarters, Claure will receive a $500,000 signing bonus, be paid $1.5 million per year in base salary, with an initial year performance bonus potential of 250% of that salary, and a 200% performance bonus potential for Sprint’s 2015 fiscal year.
RCR Wireless News spoke with Claure at the 2013 Mobile World Congress event on Brightstar reaching $10 billion in annual revenues.

As for Brightstar, Claure will resign his position on Brightstar’s board, with current Brightstar board member Ronald Fisher tapped to become chairman at Brightstar. Fisher is also the managing partner of SoftBank Capital and director and president of SoftBank Holdings, vice chairman of Sprint and a member of the board of directors at SoftBank. Arturo Osorio, most recently president of Brightstar’s global operations, has been named president and COO of the company as the board of directors begins the search for a new CEO.

Consolidation put on ice … for now

As part of the management shuffle, Son also hinted that Softbank was putting aside a rumored takeover bid of Sprint rival T-Mobile US.
“Marcelo is a successful entrepreneur who transformed a start-up into a global telecommunications company. He has the management experience, passion and drive to create the strongest network and offer the best products and services in the wireless industry,” Son said in a statement. “While we continue to believe industry consolidation will enhance competitiveness and benefit customers, our focus moving forward will be on making Sprint the most successful carrier.”
Claure backed that notion with similar comments.
“I am honored to have the opportunity to now lead the Sprint team as we mobilize to become the wireless carrier of choice in the U.S.,” Claure said in a statement. “In the short-term, we will focus on becoming extremely cost efficient and competing aggressively in the marketplace. While consolidating makes sense in the long-term, for now, we will focus on growing and repositioning Sprint.”
Investors seemed less enthused by the news, sending Sprint’s stock (S) down more than 18% in early Wednesday trading. T-Mobile US’ witnessed its stock (TMUS) sink more than 7% in early trading.
While Sprint never officially acknowledged plans to make a bid for T-Mobile US, rumors of such a move have been rampant. Reports recently indicated that Softbank had in place a $45 billion package to acquire Deutsche Telekom’s controlling stake in T-Mobile US and set aside up to $10 billion for a joint bidding venture in the upcoming 600 MHz incentive spectrum auction. However, the Federal Communications Commission has made comments and announced proposed changes to both auction rules and its internal spectrum screen designed to thwart a potential Sprint/T-Mobile US merger.
T-Mobile US’ future was further put into question late last week following an acquisition offer put forth by French operator Iliad that DT has reportedly shot down. Iliad is now reportedly talking to investors about increasing its bid.
Hesse, who has been at the helm of Sprint for more than six years, reportedly was set to pocket a $49 million compensation package for 2013, despite the carrier’s continued operational struggles. That package was being protested by Institutional Shareholder Services, which claimed the package was excessive and not tied to operational performance, though Sprint claimed 2013 was a “transformational” year for the carrier. That transformation included the acquisition by Softbank, Sprint’s purchase of the remaining stake in Clearwire that it did not already own, the shut down of its legacy iDEN operations and the announcement of its Spark network initiative.
“I’m proud of the resilience of Sprint’s people during a difficult transformation and I’m optimistic about how they will build on a foundation of innovation to succeed in the future,” Hesse said in a statement. “It’s been an honor to have led such dedicated teammates for more than six-and-a-half years. Marcelo has been a great addition to Sprint’s board and his entrepreneurial background, business savvy, industry experience and strong relationship with Masayoshi Son make Marcelo an excellent choice to lead Sprint going forward.”
Bored? Why not follow me on Twitter?