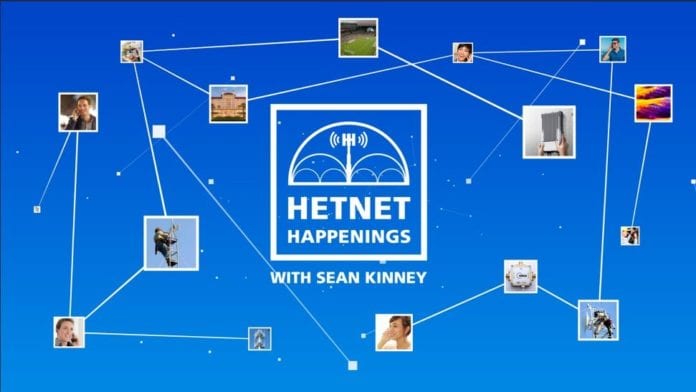 Learn more about the MulteFire Alliance, hear from analyst Monica Paolini and see a demo from Qualcomm

Spectrum is an incredibly valuable, but inherently limited, resource. Given that reality, the telecom industry has found ways to deploy cellular in unlicensed spectral bands commonly used by Wi-Fi. One flavor of LTE in unlicensed spectrum is MulteFire, which differs from Licensed Assisted Access in that it doesn’t require an anchor tenant deployed in a licensed band.
This week on HetNet Happenings, we’re going to learn more about MulteFire from Stephan Litjens, chairman of the MulteFire Alliance and the head of innovation steering for Nokia.
“We said … we want to enable different types of use cases,” Litjens explained. “We moved the uplink and downlink into unlicensed, the control channels, the signaling channels, everything you need to build a standalone LTE network into the unlicensed band. It brings you LTE functions like mobility, quality of service, better coverage, than other technologies there in the unlicensed band.”
RCR Wireless News caught up with Senza Fili Consulting President Monica Paolini during Mobile World Congress 2016 to get her take on MulteFire.
“It’s another possibility to use that spectrum and that is not for mobile operators, generally speaking, because in that case you do not need a licensed band,” she said. “So the question is, if you want to take advantage of the LTE air interface in an unlicensed band, but you do not have licensed spectrum, you can use MulteFire. It’s more attractive for operators that do not have access to unlicensed bands.”