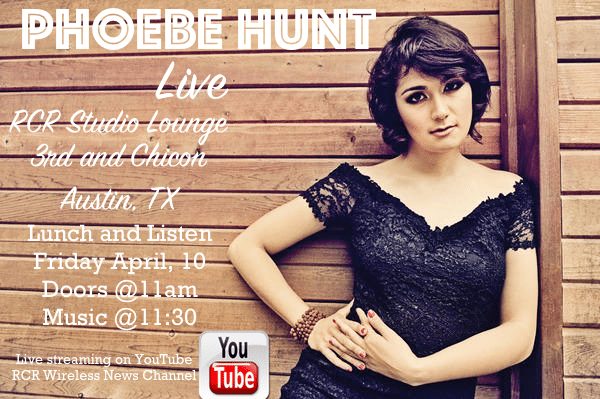 Just steps away from the Texas state capitol in Austin, the RCR Studio Lounge is an open forum for newsmakers, authors, musicians, comedians, authors, artists and key influencers to enjoy entertainment, conversation, music and industry related content in a relaxed setting.

We are delighted to host our first guest this week in the lounge — the incandescent Austin native Phoebe Hunt. Her commanding voice can rattle you to your core with its sheer power or take you back in time with standards from the classic American Songbook.

Phoebe Hunt: Dreamer Artist Musician. Like all troubadours, singer-songwriter Phoebe Hunt is a rambler. Recent years have seen the Texas native relocate from Austin to Nashville to her current residence in Brooklyn. This wanderlust is evident in the variety of projects she is a part of, moving in and out of multiple styles and genres of music with an effortless grace. Visit http://phoebehuntmusic.com/

You may find her performing completely solo, with her violin and her voice, drawing you into her memorizing vortex, or surrounded by a group of young musicians from all around the world as a part of The One Village Music Project, playing songs written and recorded at a program that Phoebe initiated out of her desire to play her role in healing the world with music.

Chris Martin – RCRatx Executive Producer: Chris is a veteran producer / director who started in the revered CBS News division, principally as a producer for Dan Rather at “60 Minutes”. He went on to be a producer at “The Oprah Winfrey Show” and later at the “Dr. Oz Show”. After more than 20 years at the highest levels of the television business he transitioned to be the Director of Multichannel Marketing for a multi-billion dollar healthcare company where he worked for three years. In 2014 he started his own multimedia consulting and production company, CAVU Media Works.