RCR Wireless NewsIntelligence on all things wireless.
YOU ARE AT:Test and MeasurementViavi launches new handheld tester 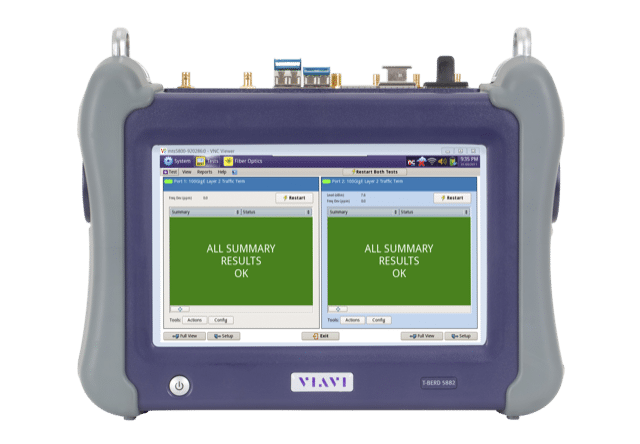 Viavi Solutions has introduced a new handheld network tester that it says is the smallest of its type, aimed at deployment and maintenance for mobile, cable and power utility networks. The T-BERD/MTS 5882 can characterize fiber, support multi-protocol service activation and supports troubleshooting and network maintenance, the company said.

Viavi emphasized the instrument’s ability to help with synchronization in complex networks, which is a challenge that applies across mobile LTE/5G networks and cable DOCSIS networks as well as utility networks with distributed power transmission elements.

“Emerging network architectures require precise timing to synchronize distributed equipment, such as with the IEEE 1588v2 Precision Timing Protocol,” Viavi said in a statement on the release of the new tester. “Ensuring that equipment is properly synchronized is critical for high-quality network operation, yet this is becoming more difficult to achieve due to growing complexity and convergence. … The move to 5G, [cable] Remote PHY and other distributed technologies means even more stringent synchronization targets must be met to prevent service degradation.”

In the context of cable networks, cable modems need to know how far off their clock is from the master reference or else their signals will be distorted, according to a 2017 presentation from Arris. That same presentation noted that precise timing for eNodeB communication in DOCSIS cable networks used for cellular backhaul can be an issue, due to jitter and latency.

The instrument has an automation application that Viavi said “consolidates and automates testing and reporting” with completion in about 30 minutes.

Kevin Oliver, VP and GM for converged instruments and virtual test at Viavi, said that the new tests addresses two major industry trends: the evolution of networks to deliver gigabit speed to the end user, and greater workforce efficiency through automation.