RCR Wireless NewsIntelligence on all things wireless.
YOU ARE AT:Network InfrastructureRed Hat sees containers as future of software-defined storage Austin, Texas — Containers and microservices are the future of software-defined storage platforms, according to Stephen Watt, chief architect for emerging technologies within Red Hat’s Office of Technology. As container technology impacts how users think about storage for applications and microservices, software-defined storage will impact how containerized applications are provisioned and managed, he added.

Watt discussed the future of software-defined storage at the SDxE Software-Defined Enterprise Conference and Expo. He began by noting the evolution of enterprise software architecture over the course of the last 10 years. “When you look at this from a storage dimension, what we have today is we scale up and scale out of storage devices.” Scale up refers to architecture that adds more processors, whereas scale out refers to architecture that adds more servers with fewer processors.

What makes software-defined storage unique, according to Watt, is it makes it easier to repurpose the underlying infrastructure. A microwave, for instance, consists of hardware and software designed with each other in mind, but the microwave’s software cannot be repurposed to turn it into a refrigerator. The key difference between appliances and software-defined storage is the former is much more purpose-custom built, whereas the latter is much programmable, Watt explained. 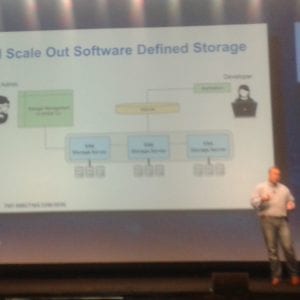 “What’s awesome about this is if you buy a single software-defined storage product, if you wanted to, you could buy rotational media because all you care about is archival or just a cheap way to store data. But may be if you are going to go with a transactional, high-performance system, you have that choice of sort of really reconfiguring your infrastructure to suite you,” Watt said.

In addition to the shift to the scale up and scale out of infrastructure is the migration to the public cloud, Watt said. “If you look at how storage is consumed in the public cloud, you had EBS. And if you wanted to, there is an API. Developers could just provision their own EBS disc if they wanted to,” he said. “But on-premises, the developer had to somehow communicate to a storage administrator to say, ‘please make me a disc.’ Sure, you have other platforms like OpenStack, but by-and-large it is more of an administrator-driven thing rather than developers having direct access to them. So what you ended up with was storage administrators who were by-and-large happy and developers who were kind of sad.”

According to Watt, the storage industry missed the memo on empowering developers with APIs. The speed of the cloud and developers both stem from an API-based ecosystem of services that provide faster and smarter applications. “As far as we look at how software-defined storage is going toward the future is that developers will be a little more joyful and software-defined storage packers will become infrastructure services accessible by developers by APIs,” Watt said.

But their are a second set of problems beyond the task of administrators that Watt expects to be resolved by containerization in the near future. Building applications create a cluster of applications that have to be developed, managed and scaled. By moving these platforms into containers, users can package a fixed amount of resources into them to ensure they run smoothly. Moreover, with open source projects like Kubernetes, containerized applications can be automatically deployed, scaled and managed, Watt said.

“Software-defined storage platforms will be containerized and deployed by a container orchestrator as infrastructure services alongside microservices. And this is the future that we are building at Red Hat,” Watt concluded.