RCR Wireless NewsIntelligence on all things wireless.
YOU ARE AT:5G5G lab advances research and development 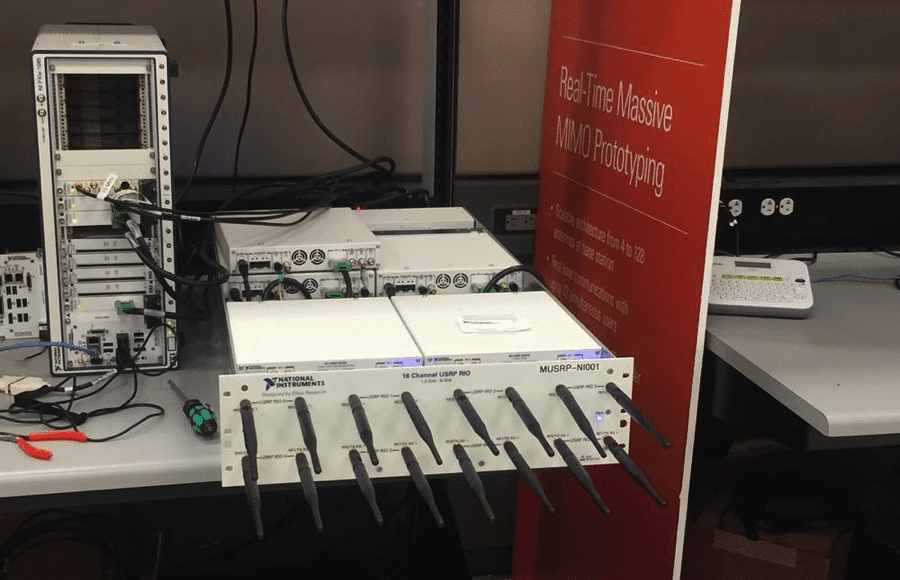 The evolving 5G standard is bringing companies from many parts of the wireless ecosystem together to create new hardware and software. Austin, Texas is a nexus of 5G research not only becuase of AT&T’s work with Intel and Ericsson, but also because of National Instruments’ 5G research lab. The company’s proprietary equipment and software are being used by carriers, chipmakers and equipment vendors to test 5G hardware and protocols. The work is focused on millimeter wave technologies, massive multiple-input, multiple-output antenna solutions, physical layer hardware, and protocol software.

Millimeter wave – LOS vs. NLOS
National Instruments has created a channel sounder for AT&T to test transmissions in the bands above 6 GHz. James Kimery, the company’s director of wireless research and marketing, said that until recently there was little data available about how channels perform in these frequencies.

“When you go above 6 GHz, that’s like going to Antarctica,” he said. He said his group has learned that channels change very frequently and that there is more reflection than expected, which can enable multipath transmission. Kimery’s team said this could mean that non-line-of-sight communication between mmWave radios will be viable.

BT has already used National Instruments’ massive MIMO equipment in a field test. Kimery said that in some tests, up to 100 separate antennas are used. He added that in the future massive MIMO and mmWave technologies may be combined.

“At a system level you can see these technologies coming together to give us some really interesting results,” he said.

5G New Radio
National Instruments has been working on 5G new radio with Nokia since 2013. This year a large group of companies, led by Qualcomm, came together ins support of a “non-standalone 5G NR standard,” which will use existing LTE equipment for control plane functions while adding new 5G equipment for some data applications.

The system on which National Instruments is testing 5G NR incorporates Verizon 5G TF, and is set to be shipped to Verizon’s lab this summer. The antennas are the one part of the system that are not made by National Instruments. The phased array antenna used for this research is made by chipmaker Anokiwave and by Ball Aerospace.

Platform approach
National Instruments works with many major wireless equipment makers and chip vendors, including Nokia, Intel, Huawei, and Samsung. The company says its
platform approach means customers can add their own RF and/or their own software, or use the radios and software made by National Instruments. The equipment in the lab is commercial grade but would probably be too costly to use in an actual wireless deployment.

Kimery and his team members are active contributors to the 3GPP standards body, and they expect the physical layer of the 5G standard to be finalzed before the end of the year.