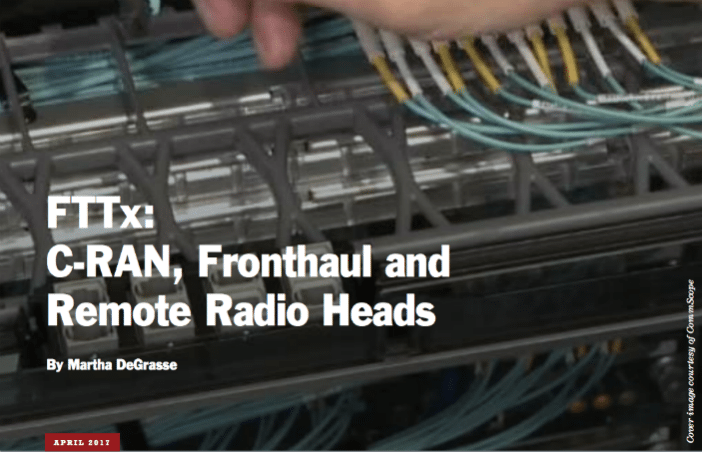 C-RAN is a mobile network architecture that is expected to be a cornerstone of 5G, and C-RAN and fronthaul go hand-in-hand. That’s because C-RAN separates two elements of the radio access network, and fronthaul is the reconnection of these elements.

C-RAN can mean a centralized radio access network or a cloud-based radio access network. In both architectures, the radio transceivers are separated from the digital baseband processors. This means that radio units can be placed closer to antennas. These radios are often referred to as remote radio units. C-RAN also enables operators to pool their baseband processing units in a convenient location — the base of a tower, or a data center or central office. This is the genesis of the term centralized RAN. A cloud RAN takes the idea one step further by moving functions that are traditionally accomplished by network hardware into software. This is called network function virtualization.

“You must centralize before you virtualize,” explained Wes Oxlee, business development director at CommScope. “The centralized RAN architectures are being built today by many operators around the world and they’re doing this in preparation for 5G.”

“The first part of centralizing is to remove that baseband processing power,” Oxlee said. “Where it traditionally would sit at the base of a tower under a conventional RAN … we move that baseband unit into a centralized pool.” Oxlee said the BBU pool could be a neutral host site that supports several operators, or it could be a carrier’s central office or a dedicated location which can be used by one operator to feed many remote nodes. In all cases, a connection between the baseband and the remote radio units is needed.

“It introduces a new layer into the network which is called fronthaul,” Oxlee said. “Typically that is done over fiber. Fiber is always the first, second and third choice.”

Carriers also use fiber for backhaul, the connection between the baseband unit and the core network. Oxlee said that as baseband pools become more sophisticated, they are taking on some functions of the core network, and fronthaul and backhaul are starting to converge.

Bobby McClung, CEO of systems integrator AWS Communications, said that when his company works on small cell site acquisition and design, fiber availability is always important to the carrier.

“A big part of the information we deliver back is to determine the closest fiber,” McClung said. “We measure the distance to the closest fiber, and if it is not available then the next step obviously would be microwave backhaul.”

For more on C-RAN and fronthaul, download RCR’s on-demand feature report and webinar.

How close are we to fully-automated Open RAN networks?