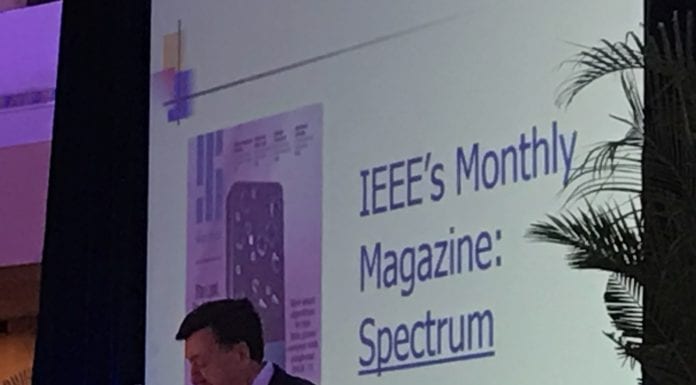 WASHINGTON – Spectrum management and allocation is one of the Federal Communications Commission’s primary responsibilities, noted Julius Knapp, chief of the FCC Office of Engineering and Technology, during a keynote speech at IEEE GlobeCom 2016, adding that the U.S. is well positioned to be a leader in “5G” and other advanced wireless services.
“You can’t deploy 5G or connected vehicles or [“internet of things”] unless you have access to spectrum,” Knapp said to a packed room at the Washington, D.C., Hilton.

But new services that require new spectrum is not a new paradigm, Knapp said. In the FCC’s 80-year history “There always have been recurring themes – we’re running out of spectrum, that any proposed new service is going to cause massive interference,” for example. “We’ve always managed to find ways to make more spectrum available to support new services and devices. The explosive growth in mobile and other services has forced us to redouble our efforts.”

In the 600 MHz band, the FCC has organized a first-of-its-kind reverse and forward incentive auction process. “It provides a means for incumbent TV broadcasters to turn in their spectrum and be compensated so the spectrum can be repurposed for mobile wireless services. After the auction, the spectrum is repacked to provide contiguous blocks,” Knapp explained.
Looking ahead to 5G, which will require high-capacity that comes with high-band, millimeter wave spectrum, Knapp highlighted the FCC’s recent move to open nearly 11 gigahertz of spectrum for commercial use, including 3.85 gigahertz of licensed spectrum and 7 gigahertz of unlicensed spectrum.
“We not only identified the spectrum, we also established a full package of rules including how we were going to license it, technical provisions and so forth. 5G is not a technology, it’s a revolution,” Knapp said, quoting FCC Chairman Tom Wheeler.
The concept of shared access to licensed and unlicensed is fundamental to the vision of 5G, which is exemplified in what the FCC is doing around the 3.5 GHz citizen broadband radio service band. The FCC is currently working through procedures that would allow up to 150 megahertz of spectrum in the band to be shared by potential users in support of licensed LTE and 5G services, and also unlicensed services using a spectrum access system.
Follow the action from IEEE GlobeCom 2016 at RCR Wireless News.