RCR Wireless NewsIntelligence on all things wireless.
YOU ARE AT:5GIndustry leaders share exciting vision for 5G at IEEE GLOBECOM 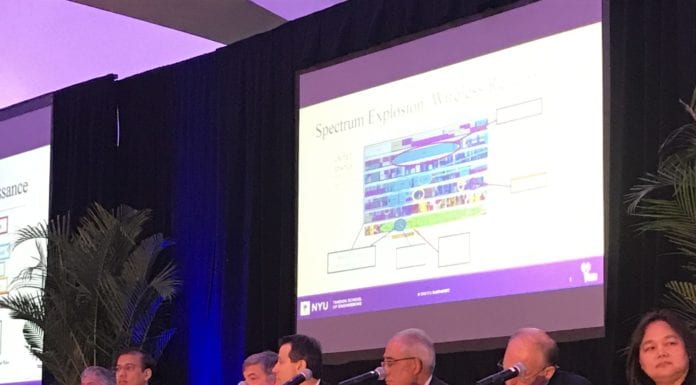 WASHINGTON – During an expansive panel discussion at this week’s IEEE GlobeCom 2016 event, a group of academic and industry reps shared an exciting long-term vision of “5G,” while stressing the key role LTE networks will continue to play in supporting wireless services.

Chih-Lin I, chief scientist of wireless technologies of China Mobile, said Bijan Jabbari, general chair of the annual event, invited her to share “our boldest dream of what 5G shall bring to us.” Referencing the 1999 Robin Williams movie “Bicentennial Man,” the story of a 200-year-old robot, Chih-Lin I said China Mobile is working on using technology to mimic the human brain. Placing that brain in the cloud would allow robots to access a vast pool of shared knowledge.

Joe Paradiso, director of the responsive environments group at the Massachusetts Institute of Technology Media Lab, in discussing the explosion of sensor networks associated with the “internet of things,” touched on how current experimentation at the MIT media lab forestalls a future where sensing doesn’t require a sensor. Paradiso said researchers have been able to use multipath RF signals to track people moving around a room and monitor respiration without the person wearing any sort of device.

Qualcomm SVP Ed Tiedemann, who was general chair of IEEE GlobeCom last year in San Diego, said constants like TV and broadcasting will be reimagined thanks to ubiquitous network access. “We no longer expect to wait for content to come to us. We want it now, we want it on the platform we have on us.”

Tiedemann explained that 5G use cases are essentially bounded by imagination. “We don’t know yet what’s going to happen, what new ideas will be out there for 5G. We have to create this general platform and we hope it will fit the applications that will be appearing in the future.”