RCR Wireless NewsIntelligence on all things wireless.
YOU ARE AT:5GAnalyst Angle: Smartphone innovation will increase in the run-up to 5G introduction 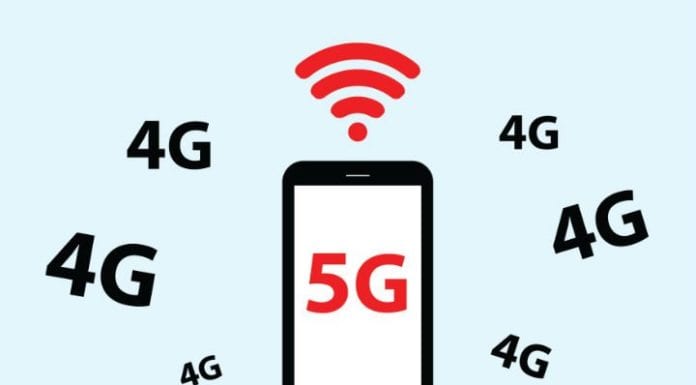 Analyst Angle: Smartphone innovation will increase in the run-up to 5G introduction

Press and industry analyst response to the recent announcement of the iPhone 7 has been lukewarm. For example, The Economist notes the “main novelty” is it no longer has a conventional jack for headphones. That newspaper reckons “after almost 10 heady years, dating from the release of the first iPhone in mid-2007, both growth and pace of innovation have slowed markedly in recent months.” I doubt the pace of innovation is really slowing or that this could ever be reliably determined over months rather than years. However, in conclusion, The Economist also wisely rejects “talk of an end to the smartphone era.”

Improvements under the hood

Whereas some smartphone innovations are very overt and revolutionary; others are not so apparent to consumers and are more evolutionary, but are at least as significant. The multitouch capabilities included in the first iPhone were literally very tangible and enabled access to regular web pages, as opposed to the repurposed content hitherto required for small displays with WAP browsers. The iPhone transformed browsing on a small device connected to the internet via Wi-Fi, but remained hobbled as a truly mobile device – six years after the introduction of the first 3G networks – with only 2G cellular connectivity and a maximum downlink speed of only around 150 kilobits per second achievable. Uplink speeds were much slower still.

Performance has improved enormously over the last nine years. LTE data rates are 1,000-times faster – at hundreds of megabits per second in the downlink, tens of megabits per second in the uplink, and latencies have reduced from several hundred milliseconds to tens of milliseconds. Ever-higher maximum cellular data rates achievable in the uplink and the downlink on the succession of iPhone models illustrates the gradual yet relentless improvements in cellular technology. For consistency over many years, the following chart includes fastest downlink data rates in device testing on commercial networks or considered likely following announcement of each new iPhone model, as indicated in contemporaneous analyst and press reports. Maximum speeds depend on latest technologies in devices and in network upgrades, which can take a year or so to roll out. Actual speeds are also affected by a user’s location and radio interference with other users nearby. For example, AT&T Mobility’s customers in New York and San Francisco suffered with slow speeds and poor availability following the introduction of the iPhone 3GS in 2009. Such problems are rarely so severe these days. 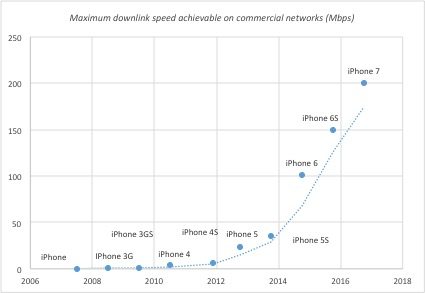 Other fundamental device improvements include the number of cellular standards and frequency bands supported. The first iPhone was a single-mode GSM/GPRS/EDGE device. Over the years, CDMA, TD-SCDMA, LTE-FDD and LTE-TDD have been added to make iPhones multimode devices. Multiple frequency bands are also employed with each standard. In particular, large and increasing numbers of bands are required for LTE. Since the introduction of the iPhone 5 in 2012, with support for LTE in up to five bands, the number of LTE bands supported has increased to 23 bands in the iPhone 7. Squeezing more and more modes, bands and other cellular functions into smartphones and getting higher and higher levels of radio performance out of them is no mean feat. It requires major innovative efforts and accomplishments in various ways.

A lot of inspiration and perspiration

Cellular technology developments have included some relatively large step-changes, for example, with new air interfaces; but developments mainly arise in a series of many incremental improvements. Even generational upgrades can take years to deploy across networks before benefits can be fully enjoyed. Until at least the turn of the millennium, cellular technology improvements were overwhelmingly in supporting voice and the most basic data capability imaginable with a maximum of 140 characters per text message. Since then, innovations have been focused on exponentially increasing speeds and network capacity for data. Numerous new technologies have been developed and introduced in the last decade. Terminology for these includes dual carrier, carrier aggregation, inter cell interference coordination, coordinated multipoint and heterogeneous networks among many others which have collectively boosted spectral efficiency, increased end-user data rates, increased network capacity and lowered latency.

The development of these standard-essential technologies is a massive coordinated endeavor involving numerous companies. According to analysis by Signals Research Group on 262,773 submissions to five 3GPP working groups from 1999 through December 2014, 43,917 documents were approved for inclusion in standards. The approved documents include 3G only, LTE only, and 3G and LTE documents as well as submissions that fall outside all of these three categories – documents pertaining to GSM/GERAN or IP multimedia subsystems are examples. More than an estimated 1 million man-hours is spent actually in 3GPP working group meetings each year. However, working group activity is merely the tip of the iceberg. Mobile communications sector research and development investment is estimated at up to $100 billion per year. Much of that is in development of standard-essential technologies including 4G recently, and now also in 5G.

‘You ain’t seen nothing yet!’

Each successive new generation of cellular technology has been driven by increasing technology developments, innovation and adoption by wireless carriers and consumers. Following the rather disappointing data rates and lackluster adoption of 3G W-CDMA between 2001 and 2005, the pace of all the above increased with the introduction of HSDPA from around 2006, and then increased again with the introduction of LTE from around 2010. Industry enthusiasm for 5G is also great and so we should expect the rate of innovation to be maintained, not diminish, with the expected introduction of 5G toward the end of the decade.

Whereas demand for 5G will be dependent on new applications such as those in artificial intelligence and augmented reality, some of those applications will only be possible by the improved performance such as ultra-low latency and ultra-high availability, as well as higher data rates that 5G communications promises. Many innovations and improvements will be required for new types of devices and services such as with the “internet of things,” but smartphones will also be in the frontline.