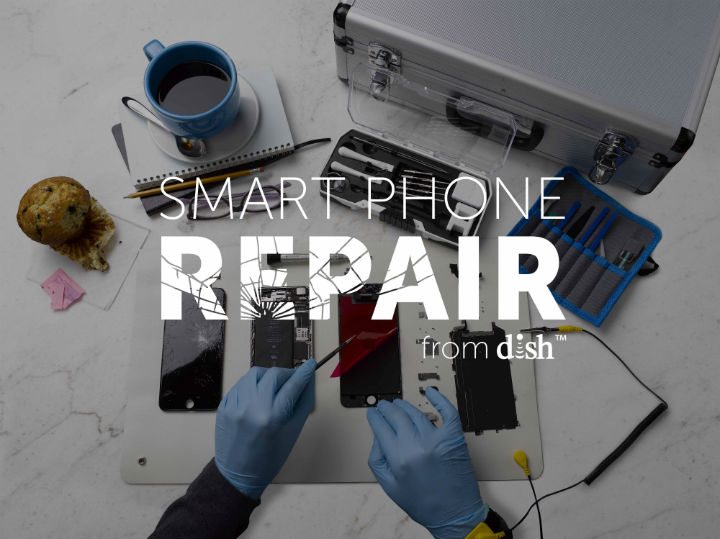 Dish Network, which continues to have an arms-length relationship with the mobile telecom space despite owning dozens of megahertz in unused wireless spectrum, has pushed into the smartphone repair space with an on-the-go program.
The satellite-based television company said its Smartphone Phone Repair service can deliver “a technician directly to a customer’s door” thanks to its “nationwide fleet” of professionals regardless if the person needing assistance is a Dish customer. Repairs can also be scheduled for other locations, including an office, school or coffee shop, with customers charged a $35 “drive to me” travel fee covering multiple device repairs at a single location.
Those technicians are said to be able to repair cracked screens and replace batteries on Apple’s iPhone 5, 5c, 5s, 6 and 6 Plus. Additional device support is expected in the coming months. Dish said the repair parts are sourced from “respected third parties,” with pricing “consistent across the country and offered upfront” via the Smartphone Repair website. Customers will receive the name and photo of the technician sent for the repair, and can track their en route progress.
Dish said it supports “onsite corporate events” should companies look to provide a large-scale service to employees. The company also notes that if it can’t repair the device, customers will not be charged, and repairs are covered by a 60-day warranty. However, the service does not include repairs for liquid damages.
“Instead of paying $650 or more to replace a smartphone, our technicians step in to extend the life of the phone when a screen shatters or a battery loses its charge,” explained John Swieringa, EVP for operations at Dish.
Dish has said it currently controls approximately 75 megahertz of spectrum nationwide, though has so far not moved to launch a commercial mobile service. Dish drew significant scrutiny for its bidding practices in the AWS-3 auction, which saw the company’s DE bidding partners Northstar Wireless and SNR Wireless pick up $3 billion in bidding credits on their $13 billion in gross bids despite being fully backed by Dish.
DE rules allow for a 15% credit for small businesses, which are those with annual gross revenue of less than $40 million for the preceding three years, and 25% for “very small business,” or those with less than $15 million in annual gross revenue. Dish Network has annual revenue nearing $14 billion.
Following an outcry from auction participants, the FCC eventually revoked the bidding credits as well as rewrote rules regarding DE participation in spectrum auctions. Dish eventually agreed to return some of the spectrum licenses, valued at $3.5 billion, won by the DEs with the stipulation that if it ends up selling for less when re-auctioned, the Dish affiliates will be expected to pay the difference.
Bored? Why not follow me on Twitter