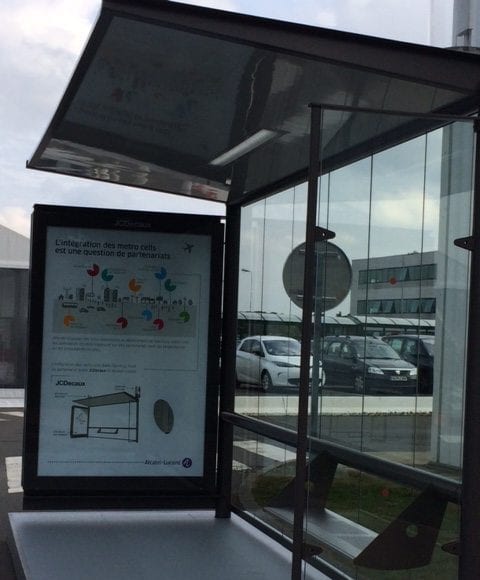 Alcatel-Lucent, currently ranked as the leading vendor of small cell equipment, has a new partnership that will put more small cells on urban “street furniture,” such as bus stops, benches and billboards. Alcatel-Lucent has partnered with its neighbor in Paris, JCDecaux, which calls itself the “number one outdoor advertising company worldwide.” Together, the two companies will develop connected street furniture to boost cellular capacity in dense urban areas.
JCDecaux has been part of Alcatel-Lucent’s Metro Cell Express Site Certification Program, through which Alcatel-Lucent helps mobile operators identify locations and backhaul solutions for small cells.
“We’re pulling together all the new non-tower ecosystem partners — advertising companies, they own infrastructure, street furniture, backhaul, and installers … what we’re doing is training all of them to be deployers of carrier-grade equipment,” said Mike Schabel, Alcatel-Lucent’s VP of small cells, speaking to RCR Wireless News when Alcatel-Lucent launched the small cell site certification program. “We have access to all of their inventory and their assets, so we’re able to cross the street furniture assets with the backhaul assets.”
Other top stories:

EMEA: Russia’s attempt to block the Internet
Vladimir Putin wants to take Russia off the global Internet in case of an emergency, according to recent reports. Could it happen elsewhere in Europe? … Read More