RCR Wireless NewsIntelligence on all things wireless.
YOU ARE AT:DevicesTriquint, RFMD to merge: exclusive interview 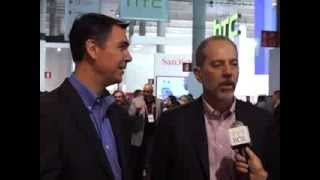 The all-stock transaction has been approved by both boards. Triquint CEO Ralph Quinsey will serve as non-executive chairman and RFMD CEO Bob Bruggeworth will serve as CEO of the new operations. The two CEOs spoke with RCR Wireless News’ Jeff Mucci yesterday at MWC 2014.

Triquint specializes in RF chipsets and is a major supplier to Apple, while RF Micro Devices focuses on filters and power amplifiers, and reportedly has a strong relationship with Samsung. While both companies serve the wireless infrastructure market, mobile devices are the primary market for the RF solutions made by both Triquint and RFMD.

Analysts say that RF technology is an area of increasing investment for smartphone manufacturers, because they want to support multiple LTE bands to enable users to take devices from one carrier to another. This increased investment in antennas and RF solutions pays off in lower production costs, as fewer versions of the phone need to be produced.

“Right now where the money is being spent is antenna filters, RF filters, antenna switches, etc.,” said Andrew Rassweiler, who directs the cost benchmarking/teardown service at IHS iSuppli. “If you want to take a phone and unlock it and eventually take it to another carrier, you’ll need to have the one-size-fits-all interface.”

“Complexity continues to increase as our customers put more and more radios into the phones and more and more complexity and in the RF section,” said RF Micro Devices CEO Bob Bruggeworth. “We actually between Triquint and RFMD have very complementary technologies that we’re going to be able to bring together, put in a smaller package, with better performance to enable our customers to bring phones to the market faster.”

The companies said the board of the new entity would be split 50/50 with eight members from each company. Combined market capitalization of the two companies pre-merger was roughly $1.6 billion.