RCR Wireless NewsIntelligence on all things wireless.
YOU ARE AT:UncategorizedFCC dives back into net neutrality cause following court decision 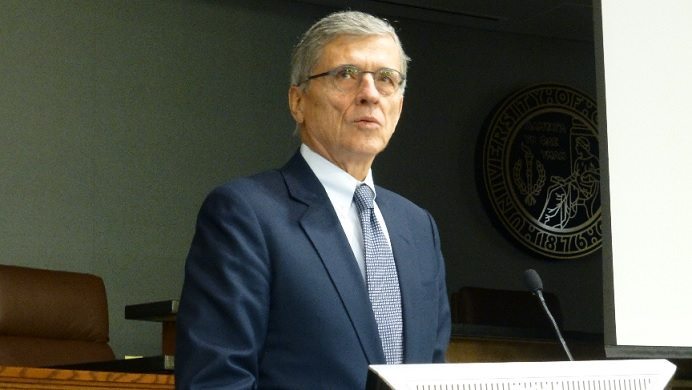 FCC dives back into net neutrality cause following court decision

“I intend to accept that invitation by proposing rules that will meet the court’s test for preventing improper blocking of and discrimination among Internet traffic, ensuring genuine transparency in how Internet service providers manage traffic and enhancing competition,” explained FCC Chairman Tom Wheeler. “Preserving the Internet as an open platform for innovation and expression while providing certainty and predictability in the marketplace is an important responsibility of this agency.”

Wheeler noted that the FCC would look at the court’s decision in regards to comments that the government agency could provide a framework for Internet regulation through Section 706 of the 1996 Telecommunications Act, which includes ant-blocking, anti-discrimination and transperancy provisions. Wheeler laid out six pillars in his proposed framework that the FCC looks to achieve.

1. Proposing new rules related enforcing and enhancing the transparency rule, to fulfilling the “no-blocking goal” and the goals of the non-discrimination rule.

2. Keeping “Title II” authority on the table: The court ruled that the FCC still had the authority to classify Internet services as a telecommunications service, thus coming under more stringent regulation. However, Wheeler has stated he would rather not make that move, though would like to keep the option on the table.

3. The FCC will not request a review of the D.C. Court’s decision in its case against Verizon Communications, citing the court’s ruling that the FCC still had options through Section 706 and Title II.

4. The FCC will solicit public comment on its net neutrality plans, announcing the opening of a new docket entitled “Protecting and promoting the open Internet.”

5. The FCC plans to hold ISP’s to their current commitments to maintaining open access to Internet services.

“That’s the right and responsible thing to do, and we take them up on their commitment – which will continue to provide protection for the open Internet until new rules are put in place,” Wheeler explained.

6. The FCC will also look to enhance competition, including looking at allowing cities to deploy their own broadband service to serve their community.

“An open internet condition in force through 2017 was imposed on Comcast as part of U.S. government approval of its NBC Universal transaction in 2011,” explained Jeffrey Silva, senior policy director for telecommunications, media and technology at Medley Global Advisors. “Such a condition could be extended and/or expanded within the scope of the Obama Administration’s consideration of [Comcast-Time Warner Cable].”

Wheeler noted during a recent speech at the University of Colorado’s Silicon Flatirons Center for Law, Technology and Entrepreneurship event that the FCC remained committed to maintaining open access to Internet services, highlighting a “seesaw” approach that if industry does not heed the need to ensure the public good is accounted for, the FCC would not hesitate to act.

“The court opinion specifically included that the commission was justified in concluding that an open Internet would further the interest of broadband deployment by enabling the virtuous cycle of innovation that unites the long-term interests of end-users, broadband networks and edge-providers,” Wheeler said at the event. “After all, it explained, when edge-providers are prevented from reaching end-users, demand for both those upstream applications and for network expansion suffer. So, the preservation of an open Internet is within the FCC’s authority.”