RCR Wireless NewsIntelligence on all things wireless.
YOU ARE AT:Network InfrastructureOSHA warns tower industry on safety after recent deaths 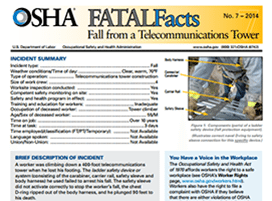 The federal Occupational Safety and Health Administration (OSHA) sent a stern warning to telecom employers in the wake of three recent tower-related deaths, and is working with the National Association of Tower Erectors (NATE) and other industry stakeholders to educate communication tower employers about their responsibility to protect tower climbers.

“Tower worker deaths cannot be the price we pay for increased wireless communication,” said Dr. David Michaels, assistant secretary of labor for occupational safety and health. “Employers and cell tower owners and operators must do everything possible to stop these senseless, preventable tragedies.”

OSHA sent a letter, penned by Michaels, to communications tower employers that was also distributed by NATE. The agency is concerned about the “alarming increase in preventable injuries and fatalities at communication tower worksites,” Michaels said, noting that there were 13 deaths in 2013 and four additional worker deaths in the first five weeks of 2014.

“Every single one of these tragedies was preventable,” Michaels said flatly in the letter. He added that OSHA “is aware that there has been acceleration in communication tower work during the past year due to cellular infrastructure upgrades, and the agency is concerned about the possibility of future incidents, especially when the hazardous work is done by employees of subcontractors. It is imperative that the cell tower industry take steps immediately to address this pressing issue: no worker should risk death for a paycheck.”

A lack of fall protection was at work in a “high proportion” of deaths, OSHA said, either because employers aren’t providing the gear or aren’t making sure employees used it. The agency pointed out that falling objects, equipment failure and tower collapse have also led to deaths in the past few months, but are not as common as falls.

Read the letter’s full text here. OSHA has a web page specific to telecom tower work regulations and assisting companies in compliance. Michaels noted in his letter that OSHA inspectors will be putting increased scrutiny on contract oversight to ensure that subcontractors are following safety rules.

In the recent West Virginia tower collapses that claimed three lives, the towers were owned by SBA Communications, which suffered a tower climber death less than a year ago. The company hired by SBA to work on the towers, S&S Communications, had already been cited for serious violations of safety by OSHA in 2009 after the death of a climber. OSHA is still investigating the cause of the recent collapse.

“For the sake of your employees and your business, I strongly urge you to do everything you can to prevent these needless injuries and deaths before anyone else is hurt, and before OSHA issues additional financial penalties,” Michaels concluded in his letter.