RCR Wireless NewsIntelligence on all things wireless.
YOU ARE AT:UncategorizedWinter Climbing 101: Top 6 tips for cold conditions 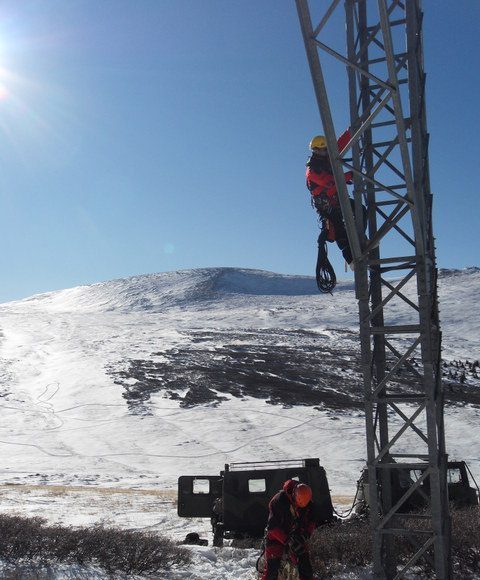 With most of the country just recovered from a polar vortex, and two Alberta clippers forecast to bring cold and snow to much of the Midwest and East Coast this week, tower climbers face chilly and dangerous conditions during winter tower work.

The experts at Safety One Training International, which specializes in tower climbing safety and rescues, offered these top tips for winter climbing and getting back to the ground safely.

“Cold weather is one of the most overlooked hazards that there is,” said Todd Horning, director of training for Safety One. “With all the things involved in working at height, the last thing on [climbers’] minds is the cold.”

Tip 1: Dress for the weather. Jeans and Carhartt-type work pants don’t provide enough warmth and can get soaked, chilling a climber further. PVC-based rain gear will hold in sweat while not providing insulation. Climbers need clothing that will breathe during the exertion of the climb, then insulate and protect them from the wind and cold temperatures during prolonged stretches at height. Horning recommended clothing from the Gortex family of fabrics. Horning also noted that thicker clothing can mean needing to adjust a climber’s harness or other personal safety gear in order to maintain good fit, as well as balancing the warmth of thick gloves vs. the dexterity needed to make connections. And climbers may want to consider bringing an extra pair of gloves, in case one gets dropped during work, rather than risk frostbitten fingers.

Safety One CEO Arthur Seely also noted that wind chill at the base of the tower can be much less than at height, causing climbers to underestimate how much protection they need.

Tip 2: Be aware of the signs of hypothermia. Seely is a paramedic and teaches university courses about the impact of hypothermia and frostbite. Seely noted that conventional wisdom has held that shivering is the body’s first reaction to cold, and generally happens at an internal temperature of 95 degrees. But new research, he said, has shown that a person’s mental processes are affected at just a core temperature of 97.4 degrees, long before shivering kicks in — and the first thing to go is the ability to clearly recognize risk and make sound decisions.

Tower conditions in winter can be particularly conducive to hypothermia and frostbite. The steel frame conducts heat away from the body at a rate 17 times faster than air, Seely warned. As the hands and feet get cold, the body cuts off blood flow to those areas because they’re losing heat, which reduces grip strength and sensation. Seely offered a simple test of dexterity: take the tip of your little finger and touch it to the tip of your thumb.

Tip 3: Don’t forget to hydrate. Climbers often assume that because the cold weather makes them unlikely to sweat, they don’t need to drag a water bottle up with them on the tower. Seely says not so fast. The lungs require lots of moisture when working in cold, dry conditions — and that can dehydrate a person faster than sweating, he said. The vast majority of water loss in cold weather is not through perspiration but respiration, he said.

Water is the fastest way to rehydrate, Seely said, because it is absorbed directly through the stomach rather than travelling through the large intestine, which can take up to four times longer.

Tip 4: Adjust communications. Even a small amount of wind can make verbal communication from the tower impossible to make out. Horning recommended that radios be used that can withstand cold weather — otherwise their batteries might die in bitter temperatures. Carrying radios inside a jacket or shirt, close to the body, can keep them warm enough to be functional.

Tip 5: Have a rescue plan in place and the gear readily accessible.

“It’s a chain of events that leads to an accident,” Horning warned. “You don’t do a good hazard assessment, you don’t dress adequately. You’re focused on ‘hey, I’ve got to pick up the equipment and get out to the site,’ and you’re not spending a lot of time thinking about what outfit or what gloves should you bring. … Then you’re getting really cold halfway up the tower, you’re in stage two hypothermia in an altered mental state with tunnel vision on the job, and you realize ‘Hey, I’m really cold and I need some help’ and you’re stuck up there.”

“Even if that happens, we can deal with that with a good rescue plan in place.”

Tip 6: Know when to call it a day. Ice and snow can bring down a tower due to the extra weight, not to mention the added risk of falling from slick surfaces. Hazard assessments are critical when conditions are cold.

“There are so many bonuses and strict guidelines for getting things done right now,” Horning said. But, he added, getting injured isn’t worth the bonus. Dropping or damaging equipment due to hazardous conditions may cause a bigger delay than waiting out a storm.

“If we can figure out a way to work safely, then we can work,” he said.

This article is brought to you by Towercrews.net, your premiere source for hiring tower industry professionals.

Ericsson Paper: Intelligent Site Engineering: A new era for the deployment and maintenance of network sites