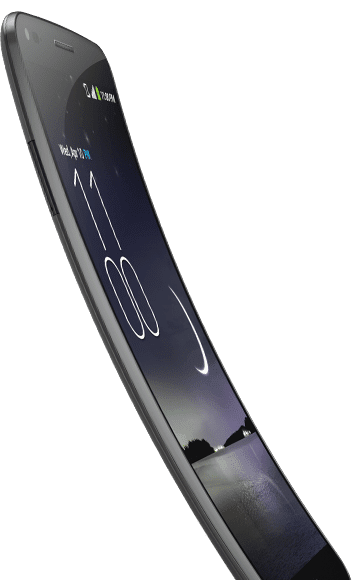 Curved screens, connected cars, and wearable tech are three of the biggest trends so far this year at CES.

Ahead of the curve
Since the human face is curved, why shouldn’t a smartphone follow that shape? That’s the apparent thinking behind LG’s G Flex, which the company calls the world’s first curved, flexible smartphone. AT&T, Sprint and T-Mobile are set to get the LG G Flex before summer.

The G Flex is not the first smartphone to use curved glass. Samsung launched its the Galaxy Round last year, but in the U.S. it is only available from third party retailers and the price is above $1,000.

Connected cars
Analyst Chetan Sharma calls it the wireless circle of life. “Phones started in the cars and now cars have become mobile devices,” he tweeted from CES. Indeed, there was plenty of connected car news before the show even officially got underway.

AT&T has partnered with Audi, and the automaker is also working with another team that includes Google, Hyundai, and GM. Meanwhile Qualcomm launched a chipset specially designed for in-car infotainment systems, and automotive supplier Visteon launched an entire suite of “cockpit electronics.”

Wearable tech
The CES show floor is crowded with companies promoting connected devices that are worn on the body, but perhaps the biggest sign that wearable tech is a trend worth betting on came from Intel. The chip giant always delivers a closely-watched keynote at the outset of CES, and this year CEO Brian Krzanich focused heavily on wearable technologies.

Krzanich demonstrated a new smartwatch, and while connected wristwear is nothing new, Intel has something different: It says its smartwatch will not need a connection to another mobile device in order to operate.

Other Intel wearables on the horizon include earbuds with a heart rate monitor and a headset with a digital voice assistant. Krzanich did not spend much time talking about smartphones and tablets, signaling that Intel may be ceding these markets to competitors and looking to establish leadership in the market for chips that power other connected devices.