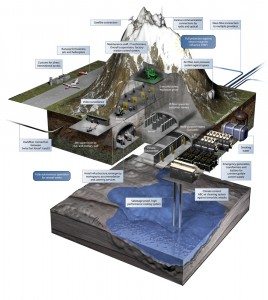 Building on a reputation in banking security and capitalizing on concerns over the U.S. spying scandal, several Swiss firms are seeing a growing interest in ultra-secure data centers. Some are even hiding data centers inside mountains.

One center run by Deltalis is housed in a former Swiss Air Force command and control center hidden inside a mountain at an undisclosed location in the Swiss Alps. Another company, Mount10, runs what it calls the “Swiss Fort Nox” (pictured right); it is built at an underground site deep in the mountains with multiple layers of security, including the “highest protection against nuclear, biological or chemical attacks.”

While such measures may seem extreme, the Swiss firms are seeing high interest in secure data storage, especially after the revelations that the U.S.’s National Security Administration is collecting data from carriers and Internet companies.

“I have two positions: one is that I am a citizen of a European country and I find it unbelievable what the Americans are doing,” Christoph Oschwald, the co-director of Mount10, told Agence France-Press. “[But] It has tripled the business within a very short time.”

Interest in security at all levels has grown for the same reason, according to a recent Infonetics Research report. “The most recent revelation that the NSA has been secretly siphoning data from Google and Yahoo! data centers worldwide has put a laser focus on the need for security at all levels of the data center, from layer 1 transport all the way up to individual applications and data,” said Jeff Wilson, principal analyst for security at Infonetics Research. “The world’s never been more tuned in to privacy and security.”

The entire global data center security market is expected to grow at a CAGR of 8.23% from 2013-2018, according to a report by TechNavio. And some of Switzerland’s 55 data centers are seeing that growth on the ground. The Green Group is currently doubling its secure data center outside of Zurich, adding another 8,330 square meters for an investment of approximately $113 million. The company recently secured a major contract from the multinational engineering company ABB which is closing its other data centers in Europe and moving the infrastructure to Switzerland.

“When we opened wing A a good two years ago I never dreamed that we would have to expand so soon,” said Franz Grüter, CEO of Green.