RCR Wireless NewsIntelligence on all things wireless.
YOU ARE AT:PolicyPCIA 2013: Tower execs bullish on growth, differ on details 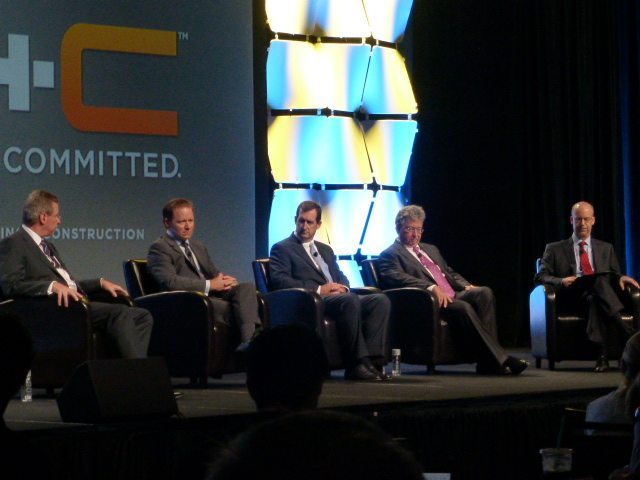 HOLLYWOOD, Fla. – To the surprise of few, leaders from the nation’s largest tower owners remain upbeat regarding the future of their market, citing the continued need for wireless carriers to feed the growing appetite for mobile data services. Speaking during the annual “View from the Top” executive round table at the PCIA Wireless Infrastructure Show, tower leaders laid out their arguments for why there are still significant growth opportunities for the market.

The main topic of conversation for both tower owners and those attending the PCIA event was the current position of wireless carriers in their LTE deployment plans. SBA Communications CEO and President Jeffrey Stoops explained that despite what the marketing coverage maps indicate, he thought the industry was still very early in the process. In addition, Stoops noted that unlike previous technology upgrades, the move to LTE is an equipment intensive endeavor, thus requiring substantial upgrades at cell sites and new revenue opportunities for tower owners.

Crown Castle President and CEO Benjamin Moreland echoed the positive sentiments, adding that the LTE coverage leaders – AT&T Mobility and Verizon Wireless – were turning their focus towards densification of their networks, while the coverage laggards – T-Mobile US and Sprint – were in a full-on press to expand basic LTE coverage as quickly as possible.

On the topic of densification, tower executives noted that they were seeing an “unprecedented” uptick in amendment activity at cell sites in order for carriers to meet the capacity needs on their networks. Steven Marshall, EVP and President of American Tower’s U.S. division, said he did not expect that activity to change much in the coming years as carriers continue to add new equipment to existing sites in order to increase capacity.

This densification is also being helped by what the speakers noted was a changing public view of wireless network infrastructure. What has in the past been a heated topic pitting the need to put in new equipment in order to meet coverage needs against those opposed to the “eyesore” associated with tower equipment, has since moderated.

“This has really changed from [not in my back yard] to [yes in my back yard],” explained Marc Ganzi, CEO of Global Tower Partners, which is in the process of being acquired by American Tower for $4.8 billion. “Towers used to be a blight on society and now they are integral into how we run our lives. … It’s been a big mind shift on the local level.”

That mind shift comes on the heels of numerous regulatory wins for the tower industry over the past 18 months that have laid out ground rules for how municipalities are to treat tower siting issues. This, in combination with Ganzi’s comment that consumers are increasingly realizing the benefits of wireless coverage, has been a boon for the tower players.

With that improved regulatory environment, Stoops noted that instead of local regulations being a gating issue for the deployment of new sites and equipment, having access to equipment and human resources was beginning to impact deployments.

While some tower owners have looked internationally to fuel growth, that move was noted with a hint of caution by some, pointing out the increased risk inherent in such endeavors.

American Tower, which has been a leader in overseas expansion, noted that while North America will continue to be its “home base” of operations, there was substantial opportunity in emerging markets that are looking to adopt the tower ownership model of the United States. SBA’s Stoops echoed the need to move overseas in order to continue driving growth, but perhaps not at quite the same pace outlined by American Tower.

Moreland, on the other hand, noted that Crown Castle remains focused on the North American market, where he feels there are continued opportunities for growth using emerging technologies such as small cells. Crown Castle in late 2011 picked up distributed antenna systems provider NexG Networks for $1 billion, an acquisition Moreland said has given the tower operator a good return and foothold in the small cell market.

American Tower’s Marshall was perhaps not as convinced, noting the small cell market was indeed something that needed to be watched, but not yet convinced there was a business model that made small cell deployments a focus of attention. Marshall said that the company is indeed invested in the technology, citing more than 260 in-building DAS deployments in venues across the country, but added that the market is still just a small percentage of the company’s overall revenues.

While not mentioned, Crown Castle is also rumored to be in advanced talks with AT&T regarding the possible acquisition of that carrier’s more than 10,000 cell sites, a move that would extend its leadership position in the domestic tower market. Moreland did note on stage that Crown Castle remains very interested in acquiring tower assets from wireless carriers, something seen from its $2.4 billion deal last year with T-Mobile USA.

That view was not shared by all however, as some noted there were always concerns regarding contract details favoring the carrier that could impact future growth opportunities at those sites.