RCR Wireless NewsIntelligence on all things wireless.
YOU ARE AT:CarriersTarget set to enter branded prepaid space with help from T-Mobile US 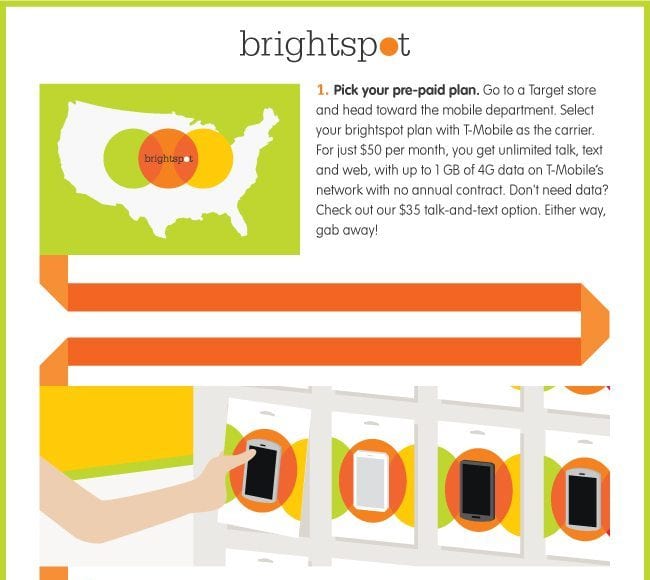 Big-box retailer Target is getting in on the branded prepaid wireless space with the impending launch of its Brightspot offering. The service is set to launch Oct. 6 running across T-Mobile US’ network.

The service begins at $35 per month for unlimited voice and messaging, with customers able to tack on 1 gigabyte of “4G” data for $15 or 4 GB for $30. For every six months of service Target will provide customers with a $25 gift card, and holders of Target’s RedCard will received an additional 5% discount.

Specific phones supporting the service have not yet been announced, though Target noted in a company blog post that it would have a “robust selection of phones – from a simple flip phone to more advanced models.” The company also said it would offer a SIM kit for customers that already own an unlocked device.

Big-box rival Wal-Mart Stores has been in the branded mobile space since 2010 with its Family Mobile offering that also runs across T-Mobile US’ network. That offering has been a significant contributor to T-Mobile US’ wholesale business, which managed to attract 319,000 net customer additions during the second quarter.

The prepaid space is indeed seeing increased competition from across carriers, with both mobile virtural network operators and facilities-based operators increasing their marketing efforts on the no-contract space. Just this week, FreedomPop announced plans to launch a free smartphone offering that provides a limited bucket of service for no monthly charge.